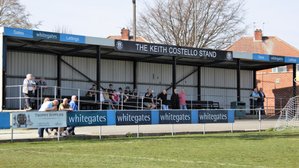 Lion's roar as they ease to victory.

Jamie Sleigh scored twice as Heanor Town eased to a 5-0 victory over Gedling Miners Welfare at the Town Ground on Tuesday night.

Following four successive defeats in all competitions, the visitors began well and Felix Hogg’s effort from range with only nine minutes played was a sign of early Welfare confidence as they looked for a much-needed return to winning ways.

The first quarter yielded very little in front of goal but Gedling were more than comfortable in possession against a Town side who came into this one having lost only twice in the league all season.

Jimmy Spiers had the first half-chance on goal with 20 minutes gone, though his shot after some typically strong hold-up play was straight at Jordan Pierrepoint who could boast three successive clean sheets before play.

Very little threatened away ‘keeper Keaton Sharpe in the early exchanges as Heanor struggled to their get their very dangerous front two of Kieran Debrower and Jamie Sleigh, with 37 goals between them this season, in the game.

However against the run of play they managed to take the lead on the half hour through an unlikely source. Tristan Matthews’ outswinging corner found unmarked defender Max Thornberry who stooped to powerfully head home past Sharpe to settle any home tension.

Now in the ascendancy, Town looked comfortable and Gedling, who were encouraging in the early stages, could only further trouble Pierrepoint with a Kieran Harrison free-kick five minutes before the break which was more than comfortable for the ‘keeper who palmed to safety.

Buoyed by Thornberry’s goal to ensure a half-time lead, things got even better for the Lions only five minutes into the second period when they found themselves scoring twice in quick succession.

Firstly, a loose pass in the middle of the park was pounced on by Sleigh and despite being dispossessed by a robust Joe Meakin tackle, the ball fell kindly for Debrower who curled past Sharpe

Shortly after, Matthews’ dangerous free-kick from the left wasn’t dealt with and ball kindly dropped to Sleigh who had the simple task of sweeping home his sides third put Heanor well on the way to securing the three points following a surprise goalless draw against Borrowash Victoria in their last outing.

Harrison’s low strike with 65 minutes played did little to worry Pierrepoint who saved well down to his right as any Gedling advance forward was excellently nullified by the impressive Thornberry and Shaun Roulston who saw a fantastically taken fourth at the other end after 66 minutes.

Showing a turn of pace, Sleigh latched onto Jordan Ball’s through ball and after rounding an advancing Sharpe, the striker fired home from the most acute angle into the far corner for his second of the night as he deservedly took the plaudits from all in attendance.

The latter period proved fruitless for Welfare who huffed and puffed but were outclassed by a professional Heanor outfit with managers Andy Clerke and Chris Marks expressing great disappointment at the manner in which their side conceded.

Lively substitute Fortunate Sithole nearly added to Welfare woes ten minutes before time when he weaved his way through a series of challenges but his rasping effort only found Sharpe’s side netting and the ‘keeper then did superbly to deny Sleigh his hat-trick when his strong one-handed save thwarted the talisman from close range.

But from the resultant corner, Heanor compounded Gedling’s misery by scoring a fifth. Matthews’ corner caused some panic in the away box and the loose ball was slammed into the top corner on the half-volley by Roulston.

Good in areas, Welfare will have learnt a lot from this showing and makes Saturday’s trip to Graham Street Prims all the more important as they cling on to a top six position, kick off 15:00.