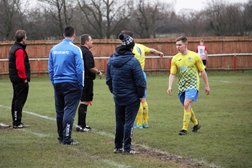 9-man Gedling Miners Welfare suffered a sixth successive defeat on Saturday afternoon as they went down 3-2 against Graham Street Prims in an ill-tempered game at The Fred Harding Ground.

The visitors began well and looked to put their midweek defeat at Heanor Town behind them as they started on the front foot against a Prims side in decent form of late and after only six minutes their early promise was rewarded.

Ross McCaughey’s delightfully threaded pass set Sol Miller on his way and the winger made no mistake in composing himself and slotting past former-Welfare ‘keeper Danny Brown for the game’s opener.

A series of half-chances followed when Luke Smith found Courtney Hastings who failed to trouble Brown with a hurried effort before Liam Corrigan and Jack Jepson combined down the right, but the latter’s acrobatic strike was always rising as Welfare began well.

With the home side offering little that would trouble Keaton Sharpe in the away goal, a cagey first period turned combative and Oliver Grimshaw should really have done better when he pounced on Dean Gent’s loose touch after 40 minutes only to drag harmlessly wide, though the game turned on its head within a few minutes.

Shortly before the interval, Gent was given his marching orders after he saw a second yellow for an innocuous tackle on Grimshaw and seconds later Dom Wilkinson capitalised on the man advantage when he fired past Sharpe after a neat interchange with Kevin Morrow to equalise for Prims.

The second half saw the hosts remain on top and Sharpe, not for the first time this season, was called upon to deny Elliott Danson’s thunderous volley with an excellent one-handed save 13 minutes after the restart.

However, he could do nothing to prevent the home side from taking the lead when the resultant George Lynam corner was met powerfully by the towering frame of Morrow who headed past the ‘keeper for a Prims side who, only two minutes later, added a third.

Ryan Seale’s angled pass was inch-perfect for Morrow who found himself in behind and after his first touch saw him round Sharpe, the experienced striker had the simple task of passing into an empty net to put the Derbyshire side well on their way to consecutive wins.

Welfare had a fine chance to get themselves back into the tie moments after Morrow’s second when Jepson’s mistimed hit inadvertently fell to substitute Joe Meakin at the back post, but his effort was blocked by the committed bodies of Adam Morley and Joss Walmsley.
Continuing the probe, the shorthanded visitors did well to force late pressure onto Prims who seemed fairly untroubled defensively all afternoon, though with 19 minutes remaining the incline of their uphill battle became ever steeper despite pulling within one.

Meakin’s high, lofted punt into the box deceived Brown in the home goal before nestling into the far corner of the net and a bench-clearing fracas ensued when Hastings, pursuing a quick restart, and the ‘keeper came to blows which saw the talisman dismissed for his part whilst Brown only walked away with a caution.

Felix Hogg then nearly stabbed home a dramatic equaliser late on when he found himself in space, but Brown did superbly to cover ground and tip onto the post as the valiant 9-man Welfare came up short as Prims ensured the three points stayed across county lines.