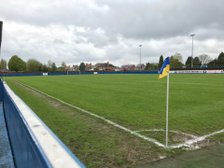 Gedling make it two from two with victory over Clifton

Gedling Miners Welfare moved up to sixth in the East Midlands Counties League with a comfortable victory over Clifton All Whites at Plains Road.

The visitors may have had the chance to make a perfect start, however, with only three minutes gone when Jevin Seaton went over after feeling pressure from Dean Gent, but early claims of a penalty were comprehensively waved away by referee Kevin Guise.

With both sides scoping one another out, the opening stages offered very little and chances on goal were limited.

Former Radford striker Ryan Smith had Clifton’s best chance with 17 minutes gone when he found himself on the end of Danny Johnson’s cross, though his acrobatic efforts did little to trouble Keaton Sharpe in the home goal.

Their only other chance of a poor first half came ten minutes later when Chad Timson skipped around Paolo Piliero and delivered a tempting cross from the right for Ryan Smith who couldn’t adjust his body in time and his shot was hooked well wide.

Seconds later, Gedling had a fine chance to go ahead when Josh Thornton’s dangerous free kick was flicked on at the near post by Luke Smith and an unmarked Liam Corrigan was inches away from sliding home the opener at the back post.

With both sets of rearguards dominating their respective battles, chances that may have ignited a rather dull first half were few and far between.

Ryan Smith found himself in behind with 25 minutes played but lacked the typical composure that has seen him tally 17 goals for the Pheasants this season and his skewed shot was rash as he sought a first in Clifton’s all white.

Gedling, for the most part, offered little going forward but were stoic in their defensive approach as the visitors found their stubborn resistance difficult to break down. However, as the interval approached, they did have a few good opportunities of their own to take the lead.

Firstly, breaking well at speed from Johnson’s loose corner, Corrigan found himself one-on-one with Warren George but couldn’t stab past the onrushing ‘keeper who reacted well off his line.

Six minutes later and Courtney Hastings’ thought he had put Welfare one up when he slammed the ball home, though nearside linesman Peter Craggs had adjudged the use of a hand in the build-up and Guise chalked off the attempt much to the dismay of the home side.

Buoyed by a strong ending the first half, Gedling came out for the second in a much livelier manner and made the perfect restart when they took only two minutes to go in front.

Patient play through the middle saw Ross McCaughey find Felix Hogg who, after neat interplay between him and Hastings, fired emphatically past a questionable George.

Shortly afterwards, Thornton’s exquisite cross from the right fell marginally out of reach of Hastings’ outstretched boot as Miners took the ascendency seeking a quick-fire second.

Clifton were disappointing, and the usually dangerous Ryan Smith, alongside former-Gedling striker Alex Haughton, could do very little against Corrigan, Gent, Luke Smith and Charlie Roberts who were outstanding all afternoon and with 64 played, Gedling doubled their lead.

Piliero’s stooped header allowed Hogg time and space to pick his spot and Hastings became the beneficiary of a sumptuous cross as he fired home past George for his second in as many games.

The striker may have contributed to the game’s third goal only eight minutes later when he turned provider, this time sliding in Piliero who couldn’t find space between George and his near post before the danger was cleared.

Without creating endless clear-cut chances, Welfare deserved the hard-fought win against a well-beaten Clifton and just after Matt Newton flicked over McCaughey’s dangerous corner late on, they added a third.

They re-visit Hucknall Town on Wednesday (29 January) in the fourth round of the Nottinghamshire Senior Cup after their recent tie was abandoned due to heavy fog at Watnall Road, kick off 19:45.

Manager Chris Marks spoke after the game: "We didn't get going first half, but came out in the second a lot better. The lads got the ball down and started to play. We also upped the tempo a lot which was needed. Great to get the clean sheet and hopefully now we can put together a bit of a run".