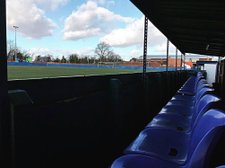 Late show not enough as Gedling fall to defeat

The visitors began well and were buoyed by their spirited Leicestershire Senior Cup run that yielded a 3-0 win away at Graham Street Prims in the week and they nearly opened the scoring after only four minutes.

Intricate play down the right between Kyle Fowkes and Adam Bowley saw a cross for Woodbine to hook just wide with an early effort that had Keaton Sharpe sprawling to cover his angles, however six minutes later Ingles made their strong start count when they took the lead.

Harshly, referee Phil Roberts had deemed Jimmy Spiers to have fouled Jordan McCourt on the edge of the area and Woodbine duly dispatched the resultant free kick into the bottom corner past Sharpe who couldn’t keep the effort out.

Despite being behind, Gedling endured lengthy spells in possession but failed to trouble an Ingles side more than content to sit and protect their lead, but with 21 minutes played the travellers couldn’t do anything to prevent an equaliser from a more direct source.

When Courtney Hastings was clumsily felled by Adam Boulter, Kieran Harrison stepped up and, like Woodbine at the other end, curled into Ryan Thacker’s bottom corner to deservedly draw Welfare level.

Things may have bettered for the hosts only six minutes later when Harrison’s free kick, this time electing for the higher route, thundered back off Thacker’s crossbar before Hastings’ shot, in behind Alex Jarvis, crashed back off the post with Felix Hogg’s follow up effort blazed well over.

Recovering well from their tenth minute setback, Miners looked the better side, though Ingles did make a game of it with their resilience and neat periods on the ball, and ten minutes before the interval they were presented the chance to regain the lead.

In gusty conditions, a high punt forward was well dealt with by Woodbine and as he drove forward into the penalty area, was clipped by a retreating Harrison who could have no complaints to referee Roberts’ awarding of a penalty.

Dusting himself down, Woodbine stepped up and slammed the ball into the top corner to give Ingles a half-time lead and double his afternoon tally.

Finding success in the cup competitions, the away side had stuttering league form, winning only once in their last six, though only two minutes after the restart, they were well on their way to improving that record by adding a third.

Woodbine, causing all sorts of problems down the left, this time turned provider when his low cross travelled all the way through to a gratefully unmarked Fowkes who fired past Sharpe.

Now facing a two-goal deficit, Gedling struggled to break down a strong Ingles side but did have a few good chances of their own either side of the hour mark.

With 58 minutes gone, Josh Thornton’s snapshot from range did little to trouble Thacker as the ball trickled wide of the mark before Liam Corrigan failed to get over a glorious headed opportunity from substitute Paolo Piliero’s corner just three minutes later.

Gedling continued to press but lacked that much-needed bit of quality in the final third to really trouble Thacker and a stubborn rearguard in front of him.

Jack Jepson’s flicked header from another dangerous Piliero cross was angled just wide as the hosts sought to take an unlikely something from the game, though they gave themselves a decent chance when they reduced the deficit 15 minutes from time.

A long ball was cleverly flicked into the path of Hastings by Jepson and, after squirming his way past McCourt’s challenge, lifted the ball over an onrushing Thacker to give his side hope of salvaging a point.

The goal sparked the hosts into a barrage of attacks in the final ten minutes and Ingles had their number one to thank for preserving their precarious lead.

Seconds after Woodbine had a good chance to seal his hat-trick and put the game out of sight, Piliero had Bowley in a spin and his beautifully delivered cross was perfect for Joe Meakin but his powerful header was straight at Thacker who deflected away to safety.

Moment later, Curtis Millward’s equally inviting cross found the head of Hastings’ whose attempt thundered back of the crossbar before Meakin’s looping hit from distance was superbly tipped over by Thacker who ensured the three points headed to Leicestershire as Welfare fell to defeat.

A disappointing result for Miners in testing conditions as they failed to capitalise on late pressure hoping to continue their impressive unbeaten run. They make the journey to Clipstone on Saturday (8 February) hoping for a swift return to form, kick off 15:00.

Manager Andy Clerke shared his thoughts post-game: "A difficult afternoon all round. I think the neutral may have thought we had the chances to put the game away, but we didn't and we were well short of our best today.

"I thought the goals we gave away were cheap and we didn't capitalise at the other end, hitting the woodwork 3/4 times. Overall, the quality wasn't where we know it should be. Credit to Ingles - they took their chances and would have been disappointed not to get something from the game.

"What we won't do is sulk and feel sorry for ourselves. The last month has been a lot better and we'll be looking for a reaction to get things back on track next week at Clipstone".