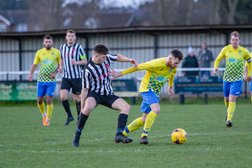 Warwick at the treble as Gedling stunned

Hoping for a quick turnaround in form after their disappointing defeat against Ingles last week, the visitors started poorly and Clipstone were unlucky not to capitalise on some defensive hesitancy early on, but both Jack Warwick and Josh Ing failed to make Welfare rue their sloppiness.

Gedling did have a fine chance with ten minutes played when a rare venture out of their own half saw Felix Hogg link up with Jack Jepson, though the striker’s effort, whilst well hit, whistled past the Sam Ogden’s far post.

Following a renaissance in recent weeks, the host’s recent league form has bettered, and they were on top in this one as Miners struggled to cope with Warwick and the impressive Declan Sorrell, making his debut after his move from Sheffield in the week.

With 22 minutes played, some more haphazard defending allowed Sorrell to pick out Liam Carrington down the right, but he couldn’t benefit as Keaton Sharpe gratefully collected from a ricochet.

Three minutes later, Ing did well to dispossess Ross McCaughey on the edge of the area but his angled effort skipped marginally wide.

In what was a poor opening 45 minutes, Miners offered very little going forward, though may have taken the lead on the half hour with their best chance of an otherwise uneventful half.

Hogg did superbly to dance around the challenges of Lewis Weaver and Kieran Blades before his superb deft lob into the path of Courtney Hastings presented the talisman with a chance to add to his seasonal record, but he could only fire his effort wide of the mark.

The chance was about as good as it got for Gedling and only six minutes later they found themselves trailing.

With ample amount of time and space, Chad Wootton’s exquisitely inviting cross was perfect for the onrushing head of an untracked Warwick who powered home past Sharpe to give Clipstone the lead.

Things may have bettered for the hosts four minutes before the interval when a breakdown in communication between Dean Gent and Sharpe saw a hurried clearance fall kindly for Wootton who curled just over the open goal from all of 40-yards with a wry smile to match a fine attempt.

A minute after the restart, Kieran Harrison’s rasping free kick was well held by Ogden as Welfare did their utmost to get back into a game where they were often the architects of their own downfall.

Gent’s short pass back to Sharpe shortly afterwards was pounced on by the alert Warwick, but the ‘keeper did excellently to stand his ground and thwart the shot with his legs before the danger was cleared.

However, only eight minutes later, the home side really did put the game out of sight.

Firstly, a trio of headers in the middle of the park weren’t dealt with convincingly and the latter, a cute flick on by Sorrell, allowed Warwick to power his way through before elegantly lobbing over Sharpe via the underside of the crossbar.

Two minutes later, Sorrell, a threat all afternoon, found Ing down the right and his deceiving cutback was swept home by former-Leeds United graduate Warwick who sealed his first hat trick since joining Clipstone who found themselves with an unassailable three goal cushion.

Not without desire and a testament to their mentality, Gedling continued to push looking for anything to salvage from the tie.

On the hour, Jepson’s mazy run through a trio of challenges saw his cross-cum-shot from the left evaded all as Ogden ushered the admirable effort wide, before a well-worked move between McCaughey and substitute Dwayne Brown saw the ball fall nicely for Hastings whose shot from 18-yards out blazed high and wide to sum up a dismal afternoon for the travellers.

With a spell of late pressure, Gedling did manage to find a way through a resolute home defence when Paolo Piliero’s unstoppable run down the left saw him beyond James McConnell and eventually poke the ball past Ogden for a goal his afternoon performance warranted before referee Martin Beard called time.

A disappointing result for Welfare who succumb to two successive league defeats after a previous decent run of form. They visit Hucknall Town on Saturday (15 February) hoping for a repeat of their cup exploits at Watnall Road only two weeks ago, kick off 15:00.

Match report compiled and written by Marc Williams
Email: marcusa.williams5@hotmail.co.uk; Twitter: ichbinmarc_
With thanks to Dan Walker at Clipstone for providing the photograph used in this report.