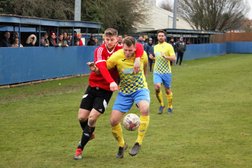 The hosts came into this one on the back of two consecutive defeats and had a fine opportunity after only four minutes to begin turning their form when Joe Meakin’s lobbed pass found Jack Jepson who was let down by a loose first touch and the ball was smothered by Liam Mitchell.

Dunkirk, meanwhile, made the short journey north of the city with a scintillating record having lost only once in their last ten and looked for the lively Blair Anderson to stamp his authority, though Charlie Roberts did well to nullify any threat as early chances were scarce.

16 minutes had been played when Miners had the first real opportunity as Paolo Piliero’s looping corner deceived Mitchell and Liam Corrigan’s backtracking header clipped the top of the crossbar.

Three minutes later and Michael Fitzhugh’s excellent cross was met powerfully in the air by Lewis Wilcox, loitering from a previous venture forward, but denied by Keaton Sharpe’s strong fist as the game began to open up.

With their challenge on the top three well and truly alive, Dunkirk grew into the tie and may have taken a 24th minute lead when James Price combined well with Anderson to find the unmarked Jordan Alls who flicked an effort wide.

Gedling were good but failed to make anything stick as they were often culpable of giving the ball away in crucial areas to really test their combative guests, though they should have really taken the lead just after the half hour with a fine chance.

Ross McCaughey’s fine reverse pass allowed Courtney Hastings to break beyond Wilcox, though hesitancy and his election to square to an unsuspecting Jepson saw the promising attack break down and eventually cut short by Peter Craggs’ nearside flag.

Both teams ended the half strong and may have gone into the break leading with a flurry of late chances at either end.

Shortly before Mason Frizzelle’s gilt-edged header from Price’s cross skied over the crossbar from six yards out, Kieran Harrison had Mitchell sprawling from a rasping free-kick, but could only rattle the crossbar with the former-Notts County and Ilkeston Town ‘keeper beaten all ends up.

Sharpe was called upon shortly afterwards when he did fantastically to first turn around Anderson’s low free-kick before, from the resultant Fitzhugh corner, palming away Frizzelle’s short-ranged header as Alls failed to maintain further pressure by curling a strike over.

Hoping to continue their pressure into the second half, the away side came out well and made the perfect restart only five minutes in when they took the lead.

Price’s dangerous cross was spooned onto the crossbar by Alls and kept alive by Jonathon Jebbison whose cross-cum-shot found Tyrell Shannon-Lewis unattended at the back post and the striker had the effortless task of tapping home his 22nd of the season.

Not to be outdone by the setback, Welfare rallied and only five minutes after going behind they found themselves back on level terms.

Pouncing on a loose pass in the middle of the park, a robust Harrison did well to bully his way through the challenges of three before unleashing a strike from distance that squirmed through the hands of Mitchell who will have been disappointed.

The equaliser revitalised Gedling who began to take a stronghold in the game as Dunkirk struggled to get a dangerous forward due of Shannon-Lewis and Alls back into the game, with Anderson, once of Crawley Town, marshalled excellently all afternoon by the brilliant Roberts.

With 17 minutes remaining, Piliero, causing the visitors all sorts of problems, slipped in Hastings down the left and his low cross was destined for Jepson to pass home but for the last-ditched attempts of Price who prevented the striker a first goal since his return to the club.

Always a threat, however, Shannon-Lewis cleverly broke the offside trap only two minutes later, but his shot was thwarted by Sharpe before a follow-up from substitute Ellis Evans was tipped around his post by the young ‘keeper.

From Fitzhugh’s subsequent corner, Frizzelle’s header was once again parried over by Sharpe who put in a fine individual showing and was proving difficult to beat.

Buoyed by the spell of late pressure, Dunkirk continued to press forward hoping to better the recent form guide and with only nine minutes remaining they were well on their way to do just that when they added a second.

Fitzhugh’s corner wasn’t cleared with authority and despite Greg Tobin’s shot being blocked, the rebound fell kindly for Anderson who fired through a crowd of players before deflecting home off Jebbison’s trailing leg to put the Boatmen back in front.

With a third successive defeat staring the hosts in the face, Gedling battled hard but failed to further test Mitchell in the away goal who was otherwise untroubled.

Harrison’s free-kick nearly salvaged a point for his side with minutes remaining, though was frustrated once again as his well-struck effort smashed the outside of the post before the danger was fully cleared and Dunkirk headed back to Lenton with an important three points to maintain their title challenge.

A disappointing afternoon for Gedling who, on another day, may have taken something from the game. They look to put things right on Tuesday (25 February) when they visit Carlton Town in the quarter finals of the Nottinghamshire Senior Cup, kick off 19:45.