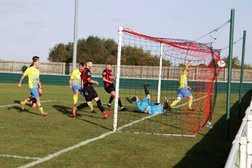 Gedling Miners Welfare got their league campaign off to a winning start after coming out on top of a seven goal thriller away at West Bridgford. A Steven Brett brace as well as goals from Kyme Mason and Felix Hogg were enough to secure all three points in a closely fought contest.

Managers Andy Clerke and Chris Marks handed former Notts County midfielder Greg Tempest and 17 year old Kyme Mason their competitive debuts for the club. It was a familiar looking backline with Keaton Sharpe given the nod to start in goal, whilst Charlie Roberts, Dwayne Brown and Ross McCaughey were all selected. Felix Hogg joined the experienced Tony Law up front in the absence of the suspended Courtney Hastings.

The match was played at a good tempo in the September sunshine at Regatta Way and it was the visitors who started the brighter of the two sides, creating a couple of good opportunities inside the opening ten minutes. Law held the ball up well on the edge of the area, despite intense West Bridgford pressure, and laid it off to Kieran Harrison whose shot was straight at the goalkeeper. A few minutes later, Law opted to take a shot on himself but saw it drift narrowly wide of the target.

In the eleventh minute the hosts took the lead, scoring from their first meaningful attack of the game. Good persistence down the right wing saw West Bridgford emerge with the ball and work it to Aaron Coyle just inside the penalty area. Coyle fired the ball across Sharpe and into the corner of the net much to the delight of the home crowd.

Gedling responded well and, six minutes later, came agonisingly close to drawing level. Mason’s low cross from the left found Hogg in the middle, he swivelled and hit a snap shot which looked destined for the bottom corner, only for James Fogg, in the Bridgford goal, to make a fingertip save and turn the ball behind for a corner.

Just before the half hour mark, Gedling’s pressure finally paid off and they levelled the score. An accurate defence splitting ball over the top from Roberts was well controlled by Mason who then spectacularly half volleyed over the goalkeeper and into the back of the net. It was a special way for the teenager to mark his first league appearance for the club.

Seven minutes later Gedling took the lead and although it was not in quite such a stunning manner it was certainly effective. Josh Thornton delivered an inviting corner from the left and Law got in front of the ‘keeper in the six yard box to head it towards goal. Brett then prodded the ball emphatically over the line from point blank range, just to make sure the defence didn’t manage to scramble it clear.

As halftime neared, Coyle threatened to grab his second for the hosts, collecting the ball on the edge of the penalty area after a loose defensive header. This time however, his shot cleared the crossbar and Gedling reached the break in the lead.

The second half began just as frenetically as the first half had finished and once again it was Gedling who carved out the best of the chances.

With just over a minute of the half played, Tempest wriggled free on the edge of the area and shot inches wide of the post. Mason then forced Fogg into a good save with a low drive after a dangerous run.

Five minutes after the restart, Brett had his second, and Gedling’s third goal of the game. West Bridgford once again failed to deal with a corner and when Harrison’s shot was blocked, Brett controlled the attempted clearance, and fired it low into the corner of the net.

The hosts looked for an instant response, and nearly found it, when Abou Sylla raced clear of the Gedling defence but a well timed challenge from Keaton Sharpe denied him a goal against his former club.

The sides then exchanged half chances with West Bridgford’s Elijah Sawyers shooting straight at Keaton Sharpe and Tempest firing wide on the turn.

As the game appeared to be heading for a low key conclusion with less than 15 minutes remaining, proceedings heated up as a manic four minutes saw three goals fly in to set up a thrilling final ten.

Gedling were made to pay for failure to properly clear a freekick, and Sawyers produced a composed finish high into the roof of the net to give West Bridgford a lifeline.

Hogg then thought he’d all but extinguished the hosts’ hopes when he turned home a delightful freekick from Tempest at the back post.

However, West Bridgford captain, Callum Lloyd, met a low cross from the right to once again reduce the deficit to one.

The closing stages were compelling and nerve racking in equal measure. West Bridgford tried to press for an equaliser but in doing so left themselves vulnerable at the back. As another move broke down in stoppage time and failed to produce a clear cut chance, Gedling almost snatched a fifth on the counter attack with Jordan Knight seeing a shot well saved by Fogg.

After six minutes of stoppage time had been played the referee’s full time whistle blew to confirm Gedling were off to a winning start and had condemned West Bridgford to their first league defeat of the season.

Steven Brett said: “It was a good game. It’s good to be back; played well. We dominated I’d say for a good 70 minutes. It was a good performance, I enjoyed it.

“I stuck my leg out, stopped it, bottom corner, that’s what I do, I’m a goal scorer haha.”