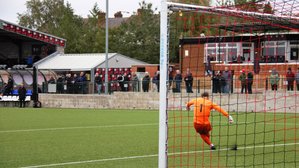 Gedling beaten on the road for the first time this season.

Goals from Sam Moore and Gareth Curtis helped Eastwood inflict a first away league defeat of the season upon Gedling Miners Welfare on Saturday afternoon.

It was a battling performance from the visitors following their disappointing midweek defeat against Clifton All Whites but ultimately they came up short against a very good Eastwood side.

Managers Andy Clerke and Chris Marks made three changes to the side from the Clifton game. Greg Tempest was restored to the midfield, Abdau Cole earned his first start having made two appearances from the bench, and Courtney Hastings returned from suspension.

The opening few minutes were cagey as both sides tried to get control of the game and settle into their respective rhythms.

Six minutes in, a quick throw from Cole midway inside the Eastwood half found Ruben Wiggins-Thomas who broke into the right side of the penalty area but his dangerous looking cross was turned behind for a corner.

Tempest’s delivery from the corner was inviting and caused a moment’s hesitation from the Eastwood defence but they were able to eventually clear it from the six yard box with Cole just about to pounce.

Gedling continued to create half chances, with Wiggins-Thomas heading straight at Mark Rathbone in the Eastwood goal and Cole having a shot well blocked following a lovely ball from Josh Thornton.

In the 16th minute, they fashioned their first clear opportunity. Hastings showed good strength to hold off two Eastwood defenders on the left edge of the box and hit a powerful right footed shot. However, good positioning from Rathbone saw him field it quite comfortably.

Rathbone’s reflexes were tested again four minutes later as Cole let fly from 25 yards with one that stung the ‘keeper’s palms.

The home side responded well and without two crucial Felix Hogg interventions within a minute, they may well have taken the lead after 25 minutes.

They were however, undeterred and three minutes later they opened the scoring. Moore broke into the right hand side of the penalty area and struck a super finish into the top left corner that gave Keaton Sharpe, in the Gedling goal, no chance whatsoever.

Eastwood’s tails were up and two minutes later, captain Jared Holmes broke down the right and cut the ball back only to see it fired against the crossbar as the Red Badgers came agonisingly close to doubling their lead.

The visitors, who had been somewhat subdued for the best part of ten minutes, managed what had become a rare foray forward. Dwayne Brown collected the ball on the right wing and drove forward before whipping a cross into the box. The wind, which blew relentlessly for the entirety of the match, caught hold of the cross and it looped over Rathbone’s head and hit the crossbar. The ball then rebounded to Hastings but he put his shot wide of the target.

Eastwood, quickly regained control and began to once again create a quick succession of good quality chances. Jermain Hollis fired over from a promising position before Joe Harrison hit a venomous shot straight at Sharpe.

Then came arguably Eastwood’s best chance of the half. A clever low cross found Curtis unmarked in the six yard box but as he tried to slot home the second goal of the game, he was denied by Sharpe who made a stupendous save with his feet at point blank range.

That was the last clear cut chance of the half and the teams left the field separated by a single goal.

The visitors came out fired up at the start of the second half and instantly took the game to Eastwood. Tempest’s sublime pass picked out Wiggins-Thomas on the left side of the box and his cross-shot went right across the face of the goal and narrowly wide.

With less than five minutes of the half played, Gedling conjured another good opportunity as Steven Brett headed a dangerous delivery over the bar.

As the hour mark approached, Eastwood grew into the half and a free kick from Harrison was smartly saved by Sharpe who then did brilliantly to readjust and keep out the rebound which seemed destined for the back of the net.

Sharpe’s heroics began to give Gedling belief and they should have levelled on 66 minutes. Thornton floated a superb cross to the back post and there, practically unmarked, was Wiggins-Thomas, who headed beyond Rathbone but crucially just wide of the post.

Moments later Holmes and Hastings clashed off the ball which caused tempers to flare between the two sets of players. Hastings was particularly aggrieved at what he perceived to be a stamp from Holmes but after consultation with his assistant, the referee decided a booking apiece was the appropriate course of action.

With 15 minutes remaining, Eastwood added a second to put the result beyond doubt. A well worked free kick picked out Curtis, who was unmarked in the six yard box, and he slotted the ball into the corner of the net much to the delight of the home fans.

Gedling threatened to add a consolation late on as Hastings held the ball up on the edge of the area and laid it into the path of Kieran Harrison. His shot was well struck but straight at Rathbone who managed to hold on to it.

Thornton then struck the bar with another wind assisted cross but try as they might the visitors could not deny Eastwood a clean sheet.

After four minutes of additional time, the referee blew the full time whistle to confirm Eastwood’s first victory of the season and Gedling’s second straight loss.

The Miners will look to bounce back with a positive result when they host Radford on Saturday 3rd October.

Chris Marks said: “It was a strong competitive game. We asked for a reaction from the lads the other night and I think the work rate and the effort was there; maybe the rub of the green didn’t go with us today. We lost to a side that took their chances. But there were a lot of positives from today.”