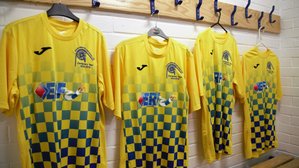 Gedling beaten in first home game of their league campaign.

Gedling Miners Welfare succumbed to defeat in their opening home match of the season against Clifton All Whites on Tuesday night. Goals from Chad Timson, Matt Timms and Kyle Stovell sealed a convincing 3-0 scoreline for the visitors.

Managers Andy Clerke and Chris Marks made two changes to the side that triumphed over West Bridgford at the weekend. Liam Corrigan replaced Dwayne Brown in defence and Ruben Wiggins-Thomas was preferred to Greg Tempest with Felix Hogg dropping into midfield.

It was a scrappy opening to the game that yielded few early chances. After seven minutes, Tony Law appeared to be bundled over in the penalty area but the referee waved away the protests. The result of this was that Law was sent to the sin bin for ten minutes for dissent.

Clifton immediately set about trying to make their temporary man advantage count and Timson had their first effort on goal after eight minutes. However, he blazed his strike way over the bar.

Two minutes later, Niall O’Rafferty weaved his way past the Gedling defence and unleashed a shot narrowly wide of the target.

For all the Clifton pressure they were yet to properly test Gedling goalkeeper Keaton Sharpe but that changed after 12 minutes when Timms struck a fierce low shot that took an awkward deflection. Sharpe was equal to it though, producing a fine one handed stop to paw the ball away from the net. Steven Brett was the quickest to react and blasted the ball to safety from within the six yard box to prevent any Clifton players from having a tap in.

The away side continued to conjure opportunities, and it was Alex Haughton who was the next to try his luck. A good run down the right saw him break into the penalty area, and from a tight angle he tried to dink the ball over Sharpe and into the left corner of the net. However, the ball just drifted wide of the post and behind for a goal kick.

A minute later, Haughton came close again, this time producing a powerful header that Sharpe did really well to turn behind for a corner.

On 25 minutes, Clifton finally found a breakthrough. Timms wreaked havoc on the right wing and broke into the penalty area. As he bore down on goal Sharpe came out to narrow the angle. At that moment, Timms cut the ball back with pinpoint accuracy to find Timson who swept the ball into the gaping net with a first time finish.

Gedling responded well to going behind and instantly piled on the pressure. This was rewarded when the referee adjudged a Gedling cross to have ben handled in the area and awarded a penalty.

Tony Law stepped up and struck the kick well, choosing to put it to the ‘keeper’s right. However, Oluyinka Abebowale guessed correctly and produced an impressive save at full stretch, turning the ball behind with both hands.

The hosts continued to press, and Kieran Harrison had two good efforts in the space of a minute. His first was a shot from the edge of the area which was blocked. Whilst his second was much closer as his free kick was deflected inches over the crossbar by a well organised wall.

With the first half ebbing away a long hopeful punt down the field from the Clifton defence caused problems for Gedling as it dropped beyond the outfield players but a few yards short of the penalty area. Sharpe raced out to take control of the situation but fired his clearance straight at Timms. He controlled the ball and slotted it into the unguarded net with great precision.

There were a couple of half chances created by the home side before the break with Josh Thronton delivering a teasing cross that was just beyond the forwards, and Felix Hogg coming really close to making a solid connection with a good ball into the area by Steven Brett. However, they were unable to haul themselves back into it and at half-time trailed by two goals to nil.

The second half was less frenetic as the visitors sat back for most of it, content to protect their lead whilst Gedling searched unsuccessfully for a way back into the match.

Harrison again tried his luck from distance soon after the restart but cleared the crossbar.

On the hour the hosts carved out their best opportunity of the evening from open play. Wiggins-Thomas surged clear of the Clifton backline and found himself one on one with the ‘keeper. He struck a firm shot but one which Abebowale was able to block and the chance was gone.

With just over 20 minutes to play Clifton went in search of a third, their attack aided by Gedling continuing to commit numbers forward. Sharpe produced a string of fine saves, the pick of which was when he palmed a free kick over the bar. There were also some heroic blocks and last ditch challenges with Liam Corrigan particularly impressive.

With ten minutes left, Clifton put the result beyond doubt as Stovell cut in from the left and his low shot squirmed underneath Sharpe to make it three.

Gedling continued to push for a consolation until the whistle with Harrison coming the closest with a shot from the edge of the box after good link up play with substitute Joshua Van Etten.

A few minutes later the whistle sounded to confirm Gedling’s first defeat of the season and an unwelcome start to their home campaign.

The Miners will look to return to winning ways this weekend when they travel to Eastwood FC on Saturday.