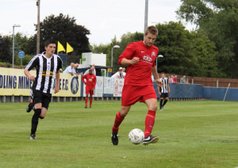 The Miners crash to an opening day defeat.

In front of the highest league gate of the day Gedling MW were well and truly taken to the cleaners by an energetic St Andrews outfit in a very dismal, disjointed and half-hearted display from the home team on the opening league game of the season.

Two strikes from visiting Skipper Danny Henfrey on 23 and 29 sealed the win early doors and seemed to knock the stuffing out of a lethargic Miners outfit. Sam Taylor added the third before the break leaving Gedling with a mountain to climb to gain anything out of the contest.

The home midfield were constantly overrun by ex-Leicester City academy player Brady Hickey and his young team mates who looked composed, were quicker to the ball and won most second balls.

The home team huffed and puffed for most of the second half without reward, the Saints keeper Luke Hall and his back line proving a formidable barrier and Mitch Warner scored a fourth 2 minutes from time to emphasise the visitors superiority.

Better Miners’ performances are surely bound to follow and this game may be dismissed as a temporary blip. Let’s hope so. Pre-season went very well and the signs are encouraging.

Previous “big-time” reputations count for nothing. Past successful individual achievements were consigned to memory today against a youthful hungrier Saints team.

The EMCL is a tough old league to play in and sterner tests await the Management team and playing squad in the weeks and months ahead.