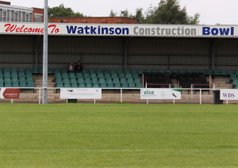 Gedling hit form in style at the Anderson Electrical Arena with four goals in a manic first half 20 minute spell. Recent signing Junior Ogedi-Uzokwe and fellow striker Mitch Slawson displayed some super front running football and the game was effectively wrapped up with a 4-1 scoreline at half time. Luke Stanley chipped in with another to assert Gedling’s domination. Vics only first period reply was a cross come lob from Jamie Pawley on the half hour which floated over Scott Miles head.

The second half was always going to be an anti-climax, and, but for an inspired display from home keeper Nathan Stone the scoreline could have been greater. He was superb in the onslaught with some fine goalkeeping.

Not for many weeks has the Miners attack been so effective and the midfield so dominant. Both full backs got forward with ease to support colleagues and the keeper was assured throughout.

Slawson added a further strike on 76 when Dan Gleeson’s cross was headed back across goal by Chukwaka Ubah for Slawson to convert. Lee Sutton got a consolation for the Vics after 80 but it was too little too late to save his side form suffering their 8th straight defeat. Sad times at the moment from a one-time great club.

The icing on the cake was the hat-trick goal in stoppage time as Uzokwe lobbed the ball past Stone after a cute pass by Luke Stanley.

A final word about the Referee ~ he ran the game with common sense and didn’t resort to brandishing cards and administering lectures about – a trait all too common these days in some of our officials.