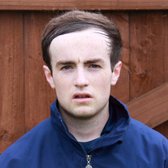 Karl Wayte's stunning goal wrapped up a welcome win for Stapenhill as Gedling Miners Welfare were swept aside. Tom Ellerton, Jamie Disney and man-of-the-match Alex Rowland also scored in Saturday's East Midlands Counties League clash at Edge Hill. The only blot on the landscape was a red card for midfielder Jordan Stevens, who was sent off for an attempted headbutt just five minutes after coming on as a substitute.

On a heavy pitch, the Swans were quickly into their stride with a Rowland free kick ricocheting to Ellerton, who tested visiting keeper Scott Miles with a decent strike. Then the busy Ellerton was dragged down on the edge of the box, with Rowland's free kick deflecting off one of his own players for a goal kick.

The Swans kept up the pressure, with Rowland and Paul Furniss combining to release Brent Upton down the right hand side.
The midfielder picked out Disney with an inviting cross but the youngster drove his effort over.

Gedling responded with a decent move ending with a strike from Joe Hopper testing Ben Gough.
Then a spell of possession in and around the Swans penalty box ended with captain Kelvin Mushambi firing just wide.

Next, Tony Law crossed to the far post to Mitch Slawson, who rippled the side netting with his shot. In between, Ellerton hit Rowland and he sent a fierce left-footed shot just wide of the target.

On 16 minutes, Stapenhill got their noses in front. Wayte held the ball up before cleverly flicking it onto the fast-breaking Ellerton, who burst into the box and somehow squeezed a shot past Miles at the near post.

The visitors went straight down the other end, with Hopper twisting and turning in the box before firing straight at Gough.
They got even closer moments later with a fine effort from Mushambi, who made space for himself before smashing the ball goalwards, but Gough, at full stretch, tipped the ball around a post.
Law then surged forward only to shoot over.

On the half-hour, the Swans were awarded a soft penalty when Rowland went down under the slightest of challenges from Harry Simpson. Rowland seemed to slip but referee Steve Thompson had no doubt and pointed to the spot.
Disney smashed the spot-kick past Miles.

The visitors, incensed by this apparent injustice, hit back with a dangerous looping shot from Slawson forcing a good save from Gough.
Then Hopper played in Mushambi and it took a crucial sliding tackle from Steve Dennahy to deny the striker.
On the restart, Slawson kept Gough's hands warm with a fine strike.

Back came Stapenhill with a vicious free kick from Rowland whipped into the six-yard box causing mayhem. Richard Perry ended up volleying it wide.

Two minutes later, the Swans got a third. Rowland cut in from the right hand side and got to the byline before dragging the ball back onto his left foot and going for goal. His shot, on target, took a wicked deflection off a defender and gave keeper Miles no chance.
The visitors kept going, with Law setting up substitute Jack Hopper with his fierce goalbound effort superbly tipped over by Gough before Hopper headed an Anthony Brown corner over.

On 65 minutes, after an unpleasant clash between Stevens and Miners midfielder Luke Stanley, the Swans man picked up a straight red card for his attempted headbutt. Stanley was also dismissed for a second yellow card.
This brought the card count to nine – seven yellow and two red – in what was hardly a dirty match.

On 86 minutes, Wayte added some icing to the Stapenhill cake. He collected a ball over the top and almost nonchalantly, from the corner of the box, sent a right-footed shot over Miles and into the top corner.
In injury time, Law laid the ball back to Courtney Bartley, who drove over as the visitors missed out on a consolation goal.