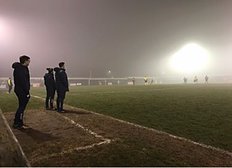 A stunning second half comeback saw 10-man Gedling Miners Welfare book their place in the quarter finals of the Nottinghamshire Senior Cup with a 5-4 penalty shootout victory over Hucknall Town at Watnall Road.

The home side would have wanted to avoid a similar start to last week’s abandoned tie where they were often second best and trailed to a single goal when the heavy fog caused the cancellation, but they had other ideas on Wednesday.

Only four minutes had passed when Jamie Crawford and Matthew Brian combined down the left before Joe Butler’s eventual strike was cleared off the line by a committed Luke Smith who did brilliantly to scoop clear.

On the contrary to seven day ago, Welfare were sluggish and failed to get any momentum going in the early stages as Town’s relentless pressure on Sharpe’s goal continued.

With eleven played, a neat interchange between Brian and Joe Butler saw the tall striker in on goal, but Sharpe did well to save low with his legs and prevent his side going behind.

Weathering the storm, Miners started to grow into the game and looked to their flanks for success, though their best chance of the half on 22 minutes was not through their own doing.

Aaron Short’s loose back pass to Adam Jablonski was awkward for the ‘keeper whose rushed clearance presented Courtney Hastings with a chance to put the visitors in front, but the usually reliable striker curled his shot marginally wide.

The game settled and the hosts reverted to a more direct approach as they failed to make their lengthy spells in possession count for much.

Former-Welfare midfielder Sam Sims’ powerful free-kick from range just after the half hour was again matched by Sharpe who did superbly to tip onto the crossbar before the resultant corner was harmlessly put wide by Lenford Jenkins.

With little to choose between the teams, it had all the hallmarks of being a tight game but five minutes before the break, the Yellows gained the advantage.

Down the left, Brian did well to shrug off Liam Corrigan and skip around Kieran Harrison before cutting the ball back for Butler who had the simple task of tapping home past Sharpe much to the delight of the loud home faithful.

Always in the game, Gedling looked for a quick turnaround and started the second period well with Hastings showing his intent but could only blaze a fine opportunity wide of its mark only five minutes after the restart when he found himself one-on-one with Jablonski.

The chance, however, came and went for the travellers whose efforts on goal were limited all evening and things looked bleak only seven minutes later when Tom Hubbard put Hucknall further in front.

A hopeful long clearance from Jablonski was well protected by the number 10, and following a slick exchange with Butler, he fired past Sharpe to put the hosts in a commanding two-goal lead.

Hoping to keep their cup hopes alive, the visitors reacted well and really made a game of it when they reduced the deficit shortly after Town’s second when Matt Newton, a constant threat to Oliver Brown all night, was hauled down in the area by the full-back who was always struggling.

A confident Hastings stepped up and duly dispatched the penalty to pull Gedling within one.

Galvanised, Welfare were well on top as the hour approached and shortly after getting themselves back in the tie, they drew level with a moment of individual brilliance.

The impressive Newton once again caused Brown all sorts of problems down the right and his direct and nimble build-up saw the wide man cut inside before unleashing a rasping drive that whistled past Jablonski who stood no chance.

Welfare’s tails were up and looked the more likely to go on and win the game with Newton the driving force behind their attacks as a suspect Brown continued to flounder.

Hastings and Ross McCaughey may have thought the turnaround was complete late on when they both had the ball in the back of the net, only for far-side linesman Derek Spray to dampen their spirits. However, they had to endure a few scares late on.

Firstly, Josh Thornton was shown a second yellow card for needlessly kicking the ball away and the ten men had their hearts in their mouths with a minute remaining when Joe Akolwa’s stabbed effort through a crowd of players was well held by Sharpe as the game headed into extra time.

With neither side unable to break the deadlock after a cautious additional thirty minutes, the game went the distance and with the scores at four apiece, Sharpe heroically saved Brian’s attempt before former-Hucknall stalwart Dean Gent sent Jablonski the wrong way to confirm Welfare’s place in the quarter finals.

A gritty, dogged, tireless performance from Gedling who progress with the utmost determination and pride, sealing their third successive win in all competitions in the process. They host Ingles at Plains Road on Saturday (1 February) hoping their fine run continues, kick off 15:00.

Delighted manager Chris Marks forwarded his thoughts after the game: "What a great cup tie! We didn’t start as well as last week and Hucknall were on their game and we just had to compete. We didn’t play our best football, but what we did show was our great character and passion; our never-say-die attitude that we’ve shown a few times this season. The main thing, though, is that we’re through and the lads deserve great credit for that. Bring on the next round!".