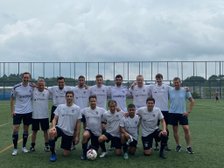 Competitive football is finally back!

The day of playing competitive football in Singapore for GAS Zweite finally took place last Sunday 18th of September 2022.
Yes, welcome to the new normal... GAS Zweite is now a Sunday League Football team. Many may think that this is due to the lack of quality of the team, but the actual reason is that the supply of the pitches in Singapore to play on Saturdays is low at the moment and the demand is high. So after months of trying to join a competitive League, EFL Sunday League was the solution.

We would lie to say that we were ready for the start of the league; the team has suffered the impact of the Covid-19 and many players have left the country, got injured, are not fit (i.e. Oscar) or found better activities to do during the weekend (a.k.a. mid-life crisis/got married).

After 2 years of not playing a league game, the GAS Zweite team were facing the Purple Monkeys Social on the opening game of the EFL Sunday League. The coaches did not know anything about the opponent, so decided to keep it classic with a 4-4-2 formation.

The match started and was even from the first minute. Unfortunately the season started by conceding a counter-attack goal. After a nice cross from Khan, the ball landed on Oscar's feet, and instead of shooting, he decided to clear the ball and make a nice pass to the opponent and the following play ended in the back of the net. Purple Monkeys 1 - GAS Zweite 0. However GAS Zweite kept fighting and displayed the team spirit that they have been showing in the last 3 friendly matches. After (another) nice cross from Khan, the defender stopped the ball with its hand inside the box and Mauricio did not forgive the mistake. The crowds were nervous before Mauricio's goal, they were wondering how would he score a goal from 11m when the last weekend he missed one from 1m. However, he proved all of them wrong. 1-1 it was and the half-time started.

Heinz; who was the head coach for this game, encouraged the team to keep the spirit during the second half, and the team delivered. GAS Zweite continued creating good chances and fighting but the effort was not compensated. The captain of the Purple Monkeys scored a screamer from outside of the box, leaving no chance to Kendrick (GK). But the match was not over, "Noventa minuti against the Germans are molto longo." Mauricio made an excellent pass to Peter who chipped the ball over the keeper to set the goal score at 2-2. Before the end of the game, the coach decided to bring in the former coach of the team (and most successful coach of the Club when it comes to Silverware) Flo S., who fought together with the rest of the team for 20 minutes. It felt a bit like a farewell for Flo since he will be relocating soon to Thailand.

We are looking forward to continuing having fun in the next matches and we expect having more committed players because the season just started.