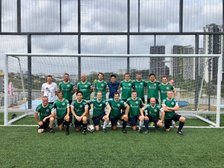 First Victory in the League for GAS Zweite

Once an afternoon with an ideal kick off timing at 6pm, GAS Zweite kicked off their 4th fixture on the back of 2 defeats whilst still looking for our first win.

We immediately got off to a positive start with Glenn Davies leading the GegenPress right from the whistle which almost paid dividends that allowed Jens Martin a shot just slightly past the post. Issac was hardly tested in goal many thanks to our backline. However, Vietnam FC did proved to be dangerous right after the water with their Number 7 who was really threatening when he whizzed past our full back numerous times to create chances and a shot on goal.

A few tweaks by Coach Heinz Braegger proved to be a tactical masterstroke in swapping Erik and Fadhil, with Erik using his physique well to quell the threat of the Vietnamese no. 7 winger and Fadhil being able to push up and support during the build-up. 2nd half proved to be rather one side with GAS zweite getting some decent chances with Oscar on the half volley just over the bar and Simonyo getting on his free header straight to the keeper. A clear cut chance was left to rue by the Russian Tank Roman, laid on Platter by Striker Glenn Davies, but took too long to take shot that was as comparable to England national team waiting to win their first trophy. Great collectively by the team to defend in the nervy final minutes to seal home the first 3 points and the clean sheet. Hopefully, many more to come. Ultimately, we need to do better next game against top of the table Sporting Fc.

Author's (Fadhil) notes:
1)All of the opponents tend to play a 4-1-4-1 formation against our 4-4-2 which leaves the opponent's no. 6 very often alot of time on the ball.
2)mindful that other teams in the league have a younger average age as compared to us, we need to ensure everyone puts in the effort to stay fit.