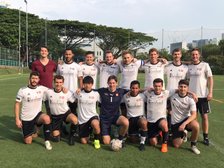 Excellent weekend, with a lot of good football!

After a strong showing in the group stage (winning the group) we played Casuals in the quarter final on Sunday morning. Exhibition football and we beat Casuals 5:0. Could have been a lot more....

On to the semi-final against Vikings. We went down 0:1 after 2 minutes but then worked our way back into the game. Julian equalized before the break. Into the second half we started to dominate and Thomas finished clinically when given a bit of space. We held on to the lead and marched into the final, where we would meet SFC, with whom we drew 1:1 in the group stage.

A bit of sloppy defending and Florian forced to commit a foul in the box. Penalty SFC and 0:1. But we reacted extremely well, and hat a few very good chances. One of them led to the equalizer when Julian hammered the ball into the roof of the net. 1:1 at the break and we looked the more likely team to score next. But for some odd reason we switched off for 5 minutes in the second half and allowed SFC to score three unanswered goals. But we showed great spirit, and never gave up. We scored through Arnaud, but that was too little too late. We probably overall had more shots on goal, and more clear-cut opportunities, but as always in football, if you don't take them, the opponent will. 4:2 SFC.

A great tournament, and we can be very proud of our team's performance. Didi Hamann, the German legend commented that Julian's shooting technique was amazing (as if we did not know that!). Every player played a big part in getting to the final, and in playing so well as a team. If we can carry this attitude into the league, we should look good!