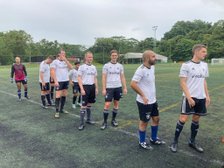 Two teams desperate to win saw Hotspurs taking more initiative with GSAS very lukewarm at the start of the game. Hotspurs with more possession and more will power, pushed hard to create chances and soon came close to scoring when a shot hit the inside of the post but bounced back into the field. Hotspurs eventually succeeded when a clumsy tackle by a GSAS defender gave Hotspur a penalty, which they duly converted. That woke GSAS a little up and better passing gave more opportunities to GSAS. Still, clear-cut chances were rare on both sides of the pitch.

The 2. half was much more entertaining in terms of football and scoring. This time, GSAS was on the receiving end of a foul in the Hotspurs penalty area and Hamza cooly converted. Taking the momentum further, GSAS made more of their ball possession and after a few attempts, Mark Addy was put through to convert from inside the box to give GSAS a 2:1 lead. That did not last very long with some woeful GSAS defending to allow Hotspurs to level after 70min. However, GSAS continued with drive and again with a similar built-up on the right wing, allowed Mark Addy to slot home from close range. The hope for GSAS victory was dashed again soon after a very soft penalty gave Hotspurs a draw, which stayed despite some good and entertaining football in the final minutes.

Thanks Hotspurs for a good and fair game