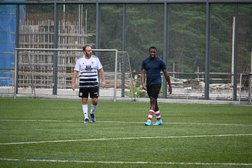 Today the German All Stars III played the Exiles FC team at best Singaporean weather conditions of 35 degrees felt temperatures.
Both teams brought up their best line up where as the Germans had some defensive tanks and the Brits some even bigger ones in their front line. To quote Seb the Tank: I can move mountains, but against this tank I felt like a fly.
Anyhow out biggest weapon Kai started from the bench, he is always best when everybody else is already at half energy, at least...
The Brits took over the first 20 min and tried all their best to score. Always a leg, the German Green Hulk in the goal or incompetence of the strikers prevented a goal. After the break we changed our strategy and we put out our best weapons against all British legs which tried to pass us. Luckily the always present Ref with eyes on the game prevented our team from red cards, but we earned our respect. The first goal was initiated by Marco passing the line to Stefan. He found Steffen the fastest mouse from Mexiko who first overran at least 5 Brits on the right side to make a perfect pass to Mauro, who just had to put the ball behind the line, before he copied that counter attack on the left side. 2:0 at half-time.

The second half started as the first started. One wave rolled towards our goal but the British were not able to score and a lot of small fights in the centre prevented any exciting chances.
After several injuries on both sides the last quarter started and our secret weapon Kai was supposed to to send the Brits into their final misery, but our defense was weakened as well. The British tank scored after a quickly executed corner when our defensive where still discussing with the Ref. After a counter attack and a great ball from our right side, the British tank turned around The German tank Seb like a Russian Ballett dancer and put the ball for his second goal to equalize the game.
We put all efforts to score a third time, after a corner where we left our defense unattended the British copied our first half tactics and finished us off.
MOM Seb G.
MOM Dave