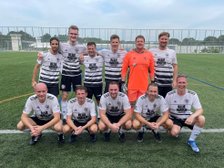 Intensive fight ended with a 2:2 draw – GAS III with two comebacks in one game

After the clear 7:1 defeat in the opening match against ADI, followed by a convincing 6:2 performance in the first home game, our team was eager to set a positive trend with the second home win. Our guests from Football Heist aimed to turn around the negative trend in their 3rd match after two defeats initially. For this third match of the season, GAS III warmly welcomed the three new joiners Jannis, Kei and Simonio.
Before the kick-off, DJ Phil utilized the JBL 310 playing the GAS III song “Der Zug hat keine Bremse” blended into “Thunder”, so he did all his best to set our squad on fire. Even though the stage was set for an aggressive start of our team, in the first quarter of the match we were struggling to set Football Heist’s defensive line and midfield under pressure.
Despite clear formations with GAS III starting in a 4-2-3-1 with previous game hattrick-scorer Christopher in the front-line and Football Heist in a classic 4-4-2, both teams were lacking pass control and Football Heist mainly operated with long vertical balls behind our defensive line, but our tall defenders Marco, Fabian, Christian and David had clear control over the airspace of German School pitch, clearing most attempts by headers.
Nevertheless, it was one of these long balls of Football Heist, that was not interfered by our forward / midfield lines and played nicely behind the defensive line causing the first real chance of the match. Football Heist’s striker controlled the long ball well and entered with speed into our box, falling over Marco’s leg while he was on his way clearing the ball out. Referee interpreted this crash as a foul and in minute 12 Football Heist took the lead by a flat shot in the lower right corner, with no chance to clear for our goal-keeper Christian.
Until the water break marked the end of the first quarter, both teams did not find the way to create clear chances. Our long passes were often too unprecise most of our offensive attempts were to hectically played by many random long distance shots missing the goal clearly.
After the water break GAS III took slightly more passing control in the midfield, leading to first chances and three consecutive corners in less than 5 minutes. The most promising chance by Fabian’s header after Bastian’s corner missed the target slightly. In this phase of the match Football Heist had less ball possession but rather focused on counter attacks by long vertical ball aiming for their quick strikers. After a foul of Football Heist close to the coach benches the referee decided to give a free-kick for GAS III in the 33rd minute of the game. Despite aiming for our tall guys in good position for headers, the free-kick by Sven came in slightly short, but the Football Heist defender deflected the ball into their own goal.
A couple of further long-distance shots by GAS III did not find their targets while Christian cleared another counter-attack by Football Heist, so both teams concluded first half of the match with a 1:1 draw.
Both teams used the halftime to bring in fresh legs, on GAS III side Kris and Markus. The first 15 minutes of the 2nd half belonged to GAS III, putting high pressure on the defense line of Football Heist, while not giving them any chance to counter. Unfortunately, the last passes could not find the strikers or pushed up midfielders in the danger zone, hence the score continued to be 1:1.
Football Heist fought hard, often too hard and with little intention to hit the ball, but just to clear the man. Short before water break, Football Heist won the ball in midfield and played a long diagonal pass behind the defenders to their bullet fast right striker, who converted this chance to be 2:1.
A few minutes later, Football Heist Goalkeeper played a high ball to their midfielder, who let the ball bounce a bit too much. Markus sneaked in between, secured the ball, ran past the last defender, and scored the deserved 2:2.
For the last 20 min GAS III brought in David on the right wing, to use his speed to break through the tired defense line. So happen few minutes later, when he was fouled with a high leg to his hip / thigh without defenders intention to reach the ball. Both players could not continue to play after this extremely hard challenge. Why the Football Heist player was not sent off with a red card or at least getting a dark yellow card – is a mystery and must be answered by the referee. Unfortunately, a high number of fouls and inconsequent ruling led to last 10 min of scattered football from both sides without causing real danger to the goals.
The game ended 2:2. Considering Football Heist being the better team with clearer chances in the first-, GAS III in the 2nd half, a deserved result.
Share via
FacebookTwitter
https://www.german-allstars.sg
Recent news