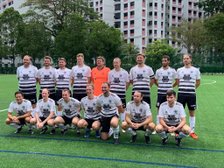 GAS III win - not for the faint-hearted!

GAS got off to a cracking start with Markus Almeroth scoring superbly after just 1 minute. What a strike, what a guy!

GAS continued creating heaps of great chances in the follow-up. Markus on the 10, Steffen and Simonyo on the wing and Christoph upfront caused real havoc in the opponent’s defense.

However, this is football. You get punished if you don’t convert and so it was Vastatores who equalized after the water break through a well taken penalty. Fabian was a tad too late and the ref had no choice but to point to the spot. 1-1 and it was game on!

GAS was caught off-guard and Vastatores started to get their pacey offensive line into the game more often now. Some good twists and turns and a late challenge 30m away from goal meant free kick for the guys in black and red in the 38th minute. The ball hit the target and Christian in goal could not keep it out of the goal.

2-1 for Vastatores - what a comeback!

Luckily, the half-time break came. GAS had some time off to cool down and regroup. The team knew that it had enough chances in the first half to put the game away. “We have to be sharper and be awake right after the break”, Coach Fabian fired up the lads.

At least one of us took that literally. Markus Almeroth scored the 2-2 after another fine effort from inside the box in the 47th minute. Well done!

The game was now open again and it took just 10 minutes for GAS to take the lead again. A corner kick swung in by Steffen, and a too short defense by the keeper and then guess who? Exactly - Markus Almeroth - the beast! 2-3!

That had to be it for the Germans.

Defensively, Seb Zeitler, Marco, Christian Becker and Captain Fabian fought hard to keep it tight at the back but another free kick from just outside the box resulted in another equalizer. No way!

It was another odd one too. GAS tried to organize its wall (some said it took 5.5 minutes) but a quick take and fine strike by Vastatores’s midfielder found the back of the net surprising wall and goalie Christian. There was no whistle, no communication with the ref, no GAS player in front of the ball and a lot of question marks. Well, the ball went in and it was 3-3.

Indeed a game not for the faint-hearted.

Marco had to be carried off the field after a badly timed challenge by the opponents.

Seb Zeitler pushed himself now forward more often and our then wingers Steffen and Markus Almeroth continued to deliver some quality passes and crosses. A won tackle by Nicolai Bloch, a quick 1-2, Seb was through and what a strike from a difficult angle inside the box! 4-4!

8 minutes to go. So who was going to really take it all now?

Vastatores had some fantastic clear cut chances in the final minutes that reminded GAS of the opening minutes of the game but this time there was no getting past goalie Christian.

On the counter attack - Dave played down the right, Steffen carried the ball into the box, cut back and Stephan Tan kept his cool to score the winner for GAS III!

Wow - what a roller coaster ride!

It was a tight game with chances on both sides, 9 goals, tough challenges and difficult situations for the ref.

GAS can be proud of coming back twice!

Kudos to Vastatores for a passionate competitive game!