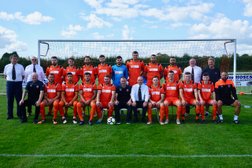 Gill lose out in 6 minute madness

Gillingham will be wondering how they never managed to see the game out after taking the lead three times in the match.

Gillingham welcomed local rivals Westland Sports to Woodwater Lane for a top four clash. Gillingham were without Dan Cox still injured along with Elliot Bevis, Buddy Oshea and Ryan Schouten all still on holiday. Gillingham Started very well and early chances fell to Matt Samuel who fired wide after good build up play. Gillingham's next chance fell to defender Elliot Eavis-Pearce following a pull back from Matt Samuel inside the box. Defender Eavis Pearce had the whole goal to aim at as he dragged his shot wide. Gillingham did take the lead when Matt Samuel found himself with a yard of space on the edge of the Westlands box. Samuel shot low into the bottom corner to give the hosts the deserved lead. Gillingham really should of increased their lead when the ball fell to play-maker Jamie Jordan who's shot smashed against the post with the visiting goalkeeper well beaten. The visitors created very little and offered very little during the first half apart from a few long throws into the box.

The second half started very much the opposite for the hosts. A long ball forward saw defender Elliot Eavis-Pearce caught his man on the edge of the box. The ball then fell to an on rushing striker who went down very easily under minimal in the hosts box to be awarded a penalty. The visitors midfielder stepped up and slotted the ball past Scott Armstrong in the Gillingham Town goal. Gillingham seemed un-phased by being back on level terms and soon had a penalty of their own when Matt Samuel was clattered in the box following a free kick. Up stepped in form striker Aaron Rodriquez who smashed the ball home. The lead was short lived after another soft free kick saw a long ball into the box only to be headed into the far corner of the Gillingham Town goal. The usual reliable Scott Armstrong will be extremely disappointed to have been beaten from just inside the box, although it was in the corner. Gillingham then continue to play their good football and resumed control of the game. With 7 minutes remaining Gill found themselves back in front when Jamie Jordan found Matt Samuel on the edge of the box. Matt Samuel ghosted past the Westland's defence as if they wasn't there. Samuel then smashed the ball into the top left corner of the net. The lead however was very short lived when a long throw in the box was cleared back out to the thrower. The Westland's thrower attempted to cross the ball into the box, however his miss hit cross found the far corner of the net over Scott Armstrong to draw the visitors level. This was a real blow for the hosts as they didn't seem in any real danger from open play. With 3 minutes left on the clock the real sucker blow for the hosts came. Another long throw into the box caused a goal mouth scramble. Defender Jack Seymour's clearance hit the on rushing striker and the ball fell to a Westland Sports player who smashed the ball home.

Manager Paul Down commented on today's performance, " I gutted for the boys as they played really well today, in the first half we should of probably been 3 nil up. The lads played really well and we certainly didn't see them scoring four second half. I know Scott is disappointed with his performance today and his mistakes have cost us today but he has kept us in games recently. As a side we also have to do better at dealing with the long throws today as other than that they offered very little. We have a big month ahead of us now and must pick up as many points as possible. Promotion is still possible if we can finish in the top four. Next week is a tough game again as Balti are there or there about so we need to pick ourselves up quickly. "

Today's result sees the visitors close the gap with 5 games in hand on Gillingham. Gillingham drop to 3rd with Merely Cobham winning and claiming to top spot with Hamworthy Recreation not playing.