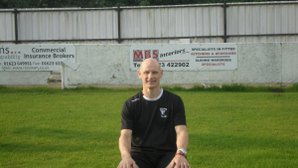 It is with regret that assistant manager Neil Grayson has left the club and retired from football indefinitely to care for his poorly wife, Tina.

Grayson has brought the curtain down on a 26-year playing career that saw him reach the Football League and achieve great successes along the way, notably winning the Conference championship in 1999 and scoring Cheltenham Town’s first ever League goal the same year.

Following his retirement from the professional game, he still carved out a memorable career in the non-league with a player/manager spell at Stafford Rangers, as well as further spells with Forest Green, Heanor Town, Carlton Town, Sutton Town as well as his two spells at Hall Corner.

Originally joining back in 2008 when the club were in the Evo-Stik League, he hit 25 goals in 89 appearances in his first spell before returning last summer as assistant manager to Jordan Hall.

Even at the age of 50, he was still a more than able performer last season, most notably scoring on his 50th birthday in the game at Welbeck last season and he also made his 100th Glapwell appearance in the victory at Thoresby back in January.

Fittingly, his final appearance saw him hit the winning goal in the single goal victory over Harworth on the final day of the season.

Overall, he hit 35 goals in 112 appearances for the club, and everyone at Hall Corner extends their best wishes to Neil, and also Tina, and wishes them both all the best for the future.

The backroom team has been reshuffled, as a result, with John Styring being promoted to assistant manager while Jordan Hall is also searching for another addition to his management team as he begins the plans for next season.

He said, ''It is with regret that we have to say goodbye to Neil as not only a player but also as assistant as well. It’s been a truly humbling experience having a man of his calibre not only in the changing room but also on the pitch. He is a massively respected in footballing circles and we have been extremely lucky to have him as part of our staff. Neil has retired from the game indefinitely after a career that was 25 plus years long.''

''He leaves with my personal thanks and good wishes from everybody at the club. We have firm plans in place for next season and these will not be affected. I have promoted John Styring to my assistant. This is purely on merit as he has been superb for me and the club over this past season. I could have shipped around and brought someone else in but it was a no-brainer to reward John. His appetite for the game is unrivalled and has so many good qualities that will make him successful and provide me with all I need. I will as likely be bringing in one more staff members over the next seven days, but rest assured we are in a position to improve again on what was a successful first season together.''

The list of pre-season friendlies is starting to come together and will be announced as soon as they are confirmed.