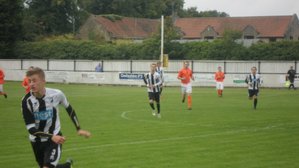 Dronfield finished in a creditable runners-up spot in the Central Midlands Football League Reserve Supreme division last season with a total of 45 points from their 24 matches. This term, their debut in CMFL Black Dragon Division North, they currently lie just three places below Glapwell, in sixth place with a total of 36 points. Although, as with Glapwell, they had no game last weekend, they are probably approaching this game with a spring in their step on the strength of their last game in which they hammered Welbeck Welfare 10-0.

The home side however have enjoyed a run of ten consecutive league games without defeat since their Derbyshire Senior Cup exit by the odd goal at the hands of Stapenhill way back in October of last year. If winning can be said to be a habit, then Dronfield will have their work cut out to halt the home side’s progress.