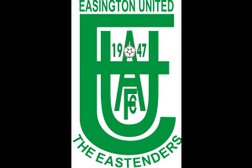 Next Saturday, April 2nd, we extend a warm welcome to Easington United to Hall Corner.

It is little over one month since the two teams met in the reverse fixture at the East Yorkshire outfit’s home ground, Low Farm. Glapwell ran out 0-3 winners on that occasion and will be looking for a win once again to maintain their league championship ambitions.

The Eastenders (a nickname given because of their location at the east end of Holderness) gained FA Charter Standard Adult Club of the Year award at both county & regional level in 2008 and have been a member of the Central Midlands Football League since 2009. This season they have already beaten Phoenix, one of Glapwell’s main rivals for the league title, so the game is not a foregone conclusion.

Recent results however favour the home side. Since the 3-0 Glapwell away victory at Low Farm on 27 February 2016 Easington have played just one game, coincidentally at another of our title challengers, Harworth CI, going down to a 2-0 scoreline.
Over this same period Glapwell have played three, winning them all with scores of 6-0, 5-1 & 3-1