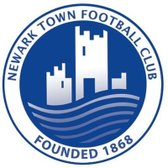 One step closer to securing the League title

such is our goal difference superiority over our nearest rivals (66 goals better!) Glapwell need only 5 points from 5 remaining matches to secure the title

The original Newark Town was formed in 1868 and played for much of the time in the Midland Counties League. The club disbanded at the start of the Second World War but the club had tasted FA Cup success during the early 1930s. They got to the second round of the FA Cup in the 1930–31 season and made the first round proper in three out of four seasons between 1929–30 and 1933–34.

For a brief period in the 1970s a group of players played under the Newark Town banner but it wasn't until the late 1980s that the club properly reformed. Initially the club only fielded junior teams but the decision was taken in 1994 to start an adults side and joined the Nottinghamshire Alliance in 1997. Newark progressed in that league, winning the Division One championship in 2003–04, earning the club promotion to the Central Midlands League. 2011 saw a re-organisation of the League and the club was originally placed in the South Division but have since transferred to the North Division.

Last season Newark finished in a creditable 4th place, 10 points ahead of Glapwell. But only weeks before the start of this term a last minute team reconstruction job was forced upon the club. The management team, and with them many of the players who had established themselves during their successful 14-15 campaign, suddenly upped and left the club. Long term servant Kevin O’Neill stepped into the hot seat and is credited with keeping The Blues going through difficult times.

Glapwell on the other hand are currently 4 points clear as league leaders with games in hand over every team in the division. If Phoenix, our closest league rivals win all of their remaining 3 games, such is our goal difference superiority over them (66 goals better!) Glapwell need only 5 points from 5 remaining matches to secure the title.