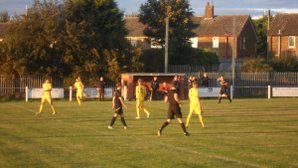 Next match at home

Ollerton Town FC will be the welcome visitors to Hall Corner this coming Saturday, 19 March 2016.

The North Nottinghamshire outfit, who were well fancied pre season, last month were crowned Central Midlands Football League Team of the Month, due in no small way we imagine to their 100% record from four league and cup games. Impressive as winning all their February games was, the achievement was further enhanced by them scoring a creditable 32 goals in the process!

This season’s reverse fixture last August at Ollerton’s home ground, The Lane, finished with a win for Glapwell by a 1-3 margin. It was however only each team’s second game of the campaign and both would likely to have still been in a settling down period.

In the league, the midweek win by Phoenix FC allowed the current league leaders to create a four point cushion between second-placed Glapwell and themselves. Glappy do have games in hand on all their rivals however, and have played three games fewer than Phoenix. A strong position maybe, but to realise potential, games in hand need to be converted into points on the board.

So on Saturday at Hall Corner we give you . . .

This will certainly provide a stern test to any team with ambitions of becoming 2015-16 Black Dragon North league champions.