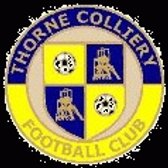 A warm welcome to Thorne Colliery FC for our next home game.

The Yorkshire outfit were early season league leaders with a scorching start to their campaign opening with successive wins of 6-1, 4-1, 3-1 and 3-1 against Bilsthorpe, Retford, Brodsworth & Dinnington respectively. However, in a seemingly rapid reverse of fortunes they then didn’t register a win again for another two months spanning five league and two cup games.

Unfortunately for Thorne, their 17 league games since the flying 4 straight win start have only yielded two further victories leaving them just below the half-way mark in 10th position.

Glapwell’s progress this season in many ways is a mirror image of Thorne’s. The home side’s first two home games, back in August, were both convincing reversals losing 1-4 at the hands of Phoenix and in the very next match a 2-4 thumping by Retford. Since that black period however the colour has changed ~ now in a purple patch of 17 league games without defeat, a club record.

The current undefeated run comprises 16 wins and one draw, interesting perhaps that the single draw in that great run was a goalless affair in January at the Welfare Ground, Moorends at the hands of today’s visitors!