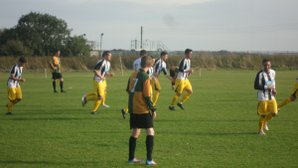 Long Away Trip to Easington

Glapwell’s next match, Saturday 27th February, will see the team making the almost 200 mile round trip to Easington on the East Yorkshire coast.

The ‘Eastenders’, so known because of their location at the east end of Holderness, have a long and proud tradition. Formed in 1947 as the Easington Football & Cricket Club, they played their early games in the long gone South Holderness League, in which time their honours included twice winning the Junior Shield. In 1958 however the cricket and football sections went their own separate ways and the football section became known as Easington United AFC.
Following the club gaining FA Charter Standard Adult Club of the Year Award at both County and Regional level in 2008 and 2009 they joined the Central Midlands Football League for the 2009/10 season. Their current season form (10th in the table) is showing a welcome improvement over the past two seasons when they finished 14th on both occasions.

Easington’s most recent six games have yielded 2 wins, 2 draws and 2 defeats, which have seen them both scoring and conceding 12 goals. One of these wins however was a 3-2 beating of the league’s current leaders Phoenix FC at “Low Farm”, as the Easington Recreation & Sports Ground is known locally. Interestingly exactly the same score that they beat Glapwell by last season. Clearly, when up for the challenge then, the current Easington side are no pushovers at home!

Inclement winter weather has dictated that Glapwell have only managed to play four games over this same period, recording 3 wins & one draw, with 9 goals for and just 1 conceded. Form that indicates they have what it takes to take the game to the Eastenders and are still a very real danger to the two sides above them in the table, Harworth Colliery and Phoenix. Glappy have played fewer games than these two rivals, but are points on the board worth more than games in hand? Time will tell.