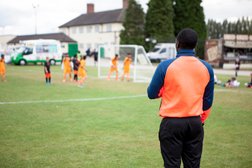 Glapwell look to keep the pressure on

Glapwell travel to Retford this weekend and will be keen to avenge the defeat in the reverse fixture back in August, where Retford powered to a 4-2 victory at Hall Corner. The North Nottinghamshire outfit have been well placed in the league for the majority of their debut CMFL season, but a post Christmas mini-run of poor results saw them lose four straight games at the end of January through the beginning of February. It seems they may have come through that sticky patch now, winning their last two games, scoring 11 goals in the process whilst conceding just the one.

As if a further incentive were needed for Glapwell, they are now just two points behind league leaders Phoenix FC with three games in hand. As the form team ~ Glapwell are now undefeated in their last 15 league games ~ they will be well fancied to make amends for the home defeat they suffered early season and keep the pressure on at the top.