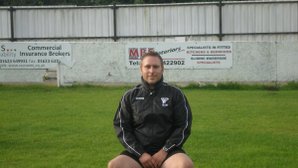 New Glapwell assistant manager John Styring is already working hard to put things in place for a successful season following his promotion to the position.

Styring, who was coach last season, has been promoted to the position of assistant manager this season following the retirement of Neil Grayson.

Both Styring, and manager Jordan Hall, are currently on the lookout for another addition to the management team as they look to build on a successful first season in charge that resulted in the club's highest finish since their return to this level.

He said, ''Firstly, I want to say that I am saddened to see Neil Grayson leave the club and retire from football. He has been a pleasure to work with and to get to know as a person, as a football icon in his own right and will be missed by everyone at the club and football fans afar, I would like to wish Neil and Tina all the best for the future.''

''I want to thank Jordan for giving me the opportunity to become assistant manager, a role that I have welcomed and looking forward to. I've known Jordan for many years, his experience and passion for football is second to none, he has the appetite to succeed and to improve the team and help the club move forward.''

''Speaking with him over recent weeks, we have looked back over last season to see where we can improve areas for the up and coming season. That being said it was a great first season for the club and management team we had a lot of ups and downs but on a whole we accomplished a lot of our goals and improved on recent league positions. I feel that the club is in a great position with a great ground to play on, the non-playing staff are working hard to ensure things are in place to create good atmosphere and for the new season ahead.''

''Personally, everyone involved in the club are working hard to ensure that we have the best opportunity to progress and improve as a club, it's a pleasure to be part of a good team. The coming weeks, myself and Jordan have been planning pre-season and arranging pre-season friendlies. We are very much looking forward to getting started with the team to prepare for the coming season and improve and progress on the last.''