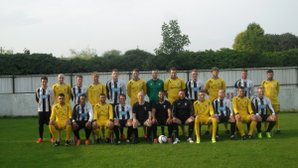 Case of 'After the Lord Mayor's Show' for Glapwell

A single goal was all that separated the sides as Brodsworth Welfare took all three points courtesy of a Tim Grundy own goal on 48 minutes as Glapwell fell to a narrow defeat at Hall Corner.

After Monday’s victory at Clay Cross Town, Glapwell would have come into the game with great confidence but, unfortunately, they couldn’t quite replicate that form although they could still have got something from the game on another day.

Brodsworth, like Glapwell, had also suffered from a slow start to the season and they too recorded their first victory of the campaign on Bank Holiday Monday and they had the first chance to take the lead in this one when Lee Winterman played in Shane Carver down the right but he shot well over the bar.

Glapwell made a solid enough start to the game, though, and although they played some good stuff at times they were lacking an end product in the final third as again the visitors had the next chance with Carver again involved but again he couldn’t find the target as he dragged a shot wide.

The first half soon became a really scrappy affair with neither side prepared to give much away but Glapwell really should have gone in front with the first real opening that fell to them on 28 minutes when Sean Gardner’s cross from the left came to Jack Weaver but he blazed a shot high over the bar from the edge of the area.

Just a couple of minutes later, Glapwell thought that they had been presented with the chance to take the lead when the referee pointed to the penalty spot. The decision was quickly, and correctly, overturned with the referee realising his mistake in that the handball offence inside the area was made by a Glapwell player and not a Brodsworth one.

But other than that there were precious few openings for either side as a nervy first period ended goalless.

Just three minutes into the second period, though, the deadlock was broken as the visitors went in front. A Lee Winterman delivery from a harshly awarded free-kick on the right touchline was sliced into his own net by Tim Grundy at the front post.

The first goal in such a tight game was always going to be crucial and the visitors could have doubled their advantage soon after but Gary Mundy could only fire straight at Ryan Hopkins in the Glapwell goal after he had cut back inside from the left.

For a spell afterwards, though, Glapwell played with more intensity and after a great bit of play involving Ainsley Finney and Adam Barratt, Ash Barber fired an effort straight at Dom Senior in the visitors goal.

A couple of minutes later, Andrei Pykett’s cross from the right was met by Barber but the ball deflected off a Brodsworth defender and went just inches past the post for a corner.

As the game wore on, it did finally become slightly more open with a quick move down the right creating a chance for Shane Carver for the visitors but his low shot was well held by Ryan Hopkins with a striker closing in on any potential rebound.

Adam Barratt then tried an ambitious effort from 30 yards for Glapwell but although it wasn’t too far wide it was never troubling Dom Senior while up the other end Lee Winterman saw his shot saved by the legs of Ryan Hopkins with the resulting corner coming to the back post where an unmarked Shane Carver really should have scored as he headed over.

A double chance then fell Glapwell’s way before the end but Ainsley Finney was denied what would have been a great goal as his dipping effort from 30 yards was brilliantly tipped over the bar by Senior before the resultant corner was played short to Ash Barber who went for goal from 20 yards but his shot was over the bar.

That was the end of the action with a single goal giving Brodsworth their second successive win. This was a battling performance from Glapwell who never gave up but were guilty of giving away possession on an all too regular basis.

They now have a fortnight off with the next game scheduled for 14th September when Thoresby CW will be the visitors to Hall Corner, 3pm, and hopefully that will be enough time to try and sort out the issue regarding the permanent management of the side.