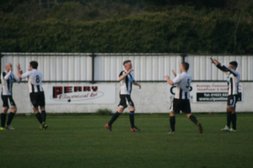 Two goals in two second-half minutes saw Glapwell turn the game around and achieve a league double over Clay Cross Town with a 2-1 victory at Hall Corner.

Glapwell had trailed to a 70th minute James Goodison goal for the visitors but debutant Peter Hibbard (pictured) and James Whitfield struck soon after to record Glapwell’s first home victory since mid-November.

They were forced into changes with five of the side that started last week’s defeat to Ollerton Town unavailable which saw Brad Dowdall, Rob Holland, Carl Vickers and Adam Seward return to the starting line-up while there was a debut in midfield for Peter Hibbard.

Games between the sides are usually close fought, entertaining affairs but unfortunately the opening 45 minutes of this one was fairly uninspiring but the second half made up for it somewhat.

In the opening stages, Clay Cross took control of possession but did little with it in the final third although they had the first chance on five minutes when the ball was played in field from the right but player/manager Ant Lynam fired an effort well over the bar from 30 yards.

But on 11 minutes, Glapwell had a big chance to take the lead as Peter Hibbard played a good ball to James Whitfield who cut in from the right and the ball found its way to Adam Seward but he blazed a shot well over the bar from the edge of the area.

The next chance for the visitors also fell to Lynam and was also from long range and it saw the same outcome as he volleyed an effort high over the bar from 25 yards.

They went a bit closer on 28 minutes when a corner from the right was cleared as far as Luke Hollis who hit a decent effort from 25 yards that he did well to keep down but it was never troubling Ryan Hopkins as it went wide.

A minute later, the best chance of the opening period fell to Glapwell as Ash Barber played the ball inside from the right to Adam Seward who was denied by visiting keeper Matt Bradwell at the near post.

That was that as far as chances were concerned for the first period and despite the visitors having more possession Glapwell had the best two chances as the sides went in goalless at the break.

Both sides were looking for an improvement after the break and Glapwell certainly got it as they had the first chance after the break when James Whitfield was played in but he saw his shot blocked by Bradwell at the near post.

The visitors again looked to play in Glapwell’s half but their possession again got them nowhere with Glapwell looking the more likely in the final third and they went close when Ash Barber laid the ball off to Peter Hibbard who brought a fine save out of Bradwell who tipped his rising effort over the bar.

From James Whitfield’s resulting corner Ash Barber flicked an header goalwards that was blocked on the line by a defender before Glapwell were denied two minutes later as Whitfield had the ball in the net but was denied by an offside flag.

The visitors made all three of their changes in the space of only seven minutes either side of the hour mark as they looked to change something to give them some cutting edge and with 20 minutes to go the first goal finally arrived as they took the lead.

Ant Lynam played the ball through to substitute James Goodison who beat the offside trap and found himself one-on-one with Ryan Hopkins and he kept his composure to tuck the ball past the keeper from just inside the area.

But Glapwell showed fighting spirit and responded brilliantly and they were level just three minutes later as Whitfield flicked the ball on to Ash Barber who played in Peter Hibbard and he finished well from eight yards for a debut goal.

Glapwell now had wind in their sails and it was no surprise when they took the lead just two minutes later when Ash Barber’s throw-in found its way to Whitfield who skipped past two defenders before tucking the ball under the body of Bradwell to complete a brilliant turnaround.

Glapwell had really come into it in the final half an hour and they deserved to be in front but they would have expected an onslaught from the visitors in the final few minutes but that never really arrived.

The visitors did go close, though, with three minutes remaining when Ben Goodwin’s cross from the left was met by James Goodison at the back post whose header was kept out by a combination of Hopkins and the post while in injury time the ball found its way to Gary Morton on the edge of the area but he curled an effort well over the bar.

This was a great win for Glapwell who complete their first league double of the season and record their first home league victory since mid-November, and only their third so far this campaign and there were some very good individual performances on the day.

But this should give them great confidence going into the final seven league games of the season, six of which are at Hall Corner, and they climb a further place to 12th and are now in touching distance of climbing back into the top ten.

They will be looking to take the momentum gained from this into next Saturday’s game when they remain at Hall Corner for the visit of fifth-placed Newark Town, kick-off 3pm.