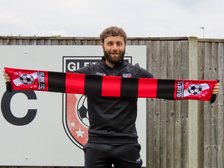 Harry tells us why he chose Glebe, his aim's for the upcoming season, building the squad and much more!

Ahead of the first training session of pre-season, I sat down with Harry Hudson for his first interview since being appointed as the new Glebe manager just over a week ago. Here’s what he had to say:

What made you choose Glebe, was there anything that stood out for you in making your decision to come here?

“Whenever we’ve played against Glebe, I’ve always thought the club had a lovely community feel. Speaking to the chairman and the board, they’re ambitious but realistic, which is exactly the sort of challenge and project I was looking for. I think the club has done the hardest bit which is the youth section then really getting the first team right, to bring the club forward; it’s at the point where I think it can really kick on. That’s what came across with the ambition of the board so that was really attractive. Location wise it’s good, pitch is fantastic. They are really important factors for me for the style we want to play. Once I met with Rocky and the board, we were very aligned with what we wanted to do and that will make for a very good working relationship.”

What are your aims/objectives for the season and what teams do you think will be dangerous in the SCEFL Premier Division?

“We want to have a successful season and will be looking to achieve on all fronts including the FA competitions too which I’ve always enjoyed personally as a manager and have a good record in them (touch wood). So the FA Vase is very interesting. But generally, we’re looking to be as successful as we can in all competitions. For the league, there’s no doubt that Chatham Town, Sheppey United and Tunbridge Wells are the 3 big hitters and they will be the ones to try and beat. We’re at the stage in year 1 where we want to mould the squad and get the style of football right, to show a pathway from the junior section which is really important here and is fantastic, it’s really thriving. We want to show a style and brand of football which will bump the crowds up hopefully so that people will want to come and watch. That the younger players can see the pathway from Under 6s all the way through to the first team, to keep that real community feel. So harness and development, that relationship, have a go on all fronts and see how successful we can be. But there are some serious teams in this league who are looking to get out of it so I will expect them to be difficult to dislodge.”

How is the initial squad building going and what sort of new players can the fans look forward to seeing?

“As with any manager, you sort of have a nucleus which you try and speak too. I think we will have a really good spine, I probably know 10 or 11 players who have signed up already which is a really fantastic position to be in and then we will look at the next 7 or 8 places in the next few weeks of pre-season. I will certainty say to the fans watch this space in the next week or so, where we will be announcing some signings which will be exciting for the club.

We’ve added in the home double header on Saturday 10th July against Lewes (1pm kick off) and Epsom & Ewell (3pm kick off). Quite often in pre-season if you want to look at players, you think you know what you have and then you’re maybe only giving players half a game here or there. So the idea of the double header, by that point, we’d have had 4 training sessions, with the opportunity to give players a good 60-70 minutes or even longer. Then we will be making a distinct cut down of the squad size after that day.”

Have you put together your backroom staff?

“Yeah. Assistant Manager will be Mark Dacey, First team coaches will be Dan Hogan and also Adam Fleming; who will be joining us from Barking. We’ll have Danny Rose as goalkeeping coach and Carly Payne will be head physio that the club have used for a number of years so a very, very strong staff team. I’ve built up a good team around me and I couldn’t be any more pleased with the staff that we’ve managed to secure.”

You must be looking forward to getting started and hopefully having an actual full season?

“It would be amazing. Everyone connected to football has missed a full season, every manager across the country no matter what level, all of us have done the hard work of pre-season and starting the season but never really got to see what that work could culminate in. I hope for everyone’s sanity we just get through a full season, if we can keeping rolling out the vaccine then I’m hopeful that will be the case. When we talk about expectations and what we want to try and achieve, realistically it will just be great to have a full completed season of football, for everyone’s mental wellbeing as well as the physical side of being involved with football so let’s just hope we can manage to achieve that!”

“Just as a message to the fans – Hopefully the style of football will be something of interest; we’d like to increase the fans that come through the gates. Continuing to engage with the youth section of the club and bring them to matches and really make them feel a part of what the first team is. And I hope we can play an exciting brand of football which isn’t just there to look good, it’s to get results as well. I’m really keen that we try and galvanise this club and move it forward!”