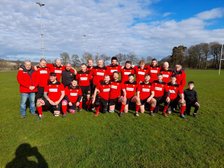 With 14 straight league defeats, including a 75-8 loss away to Caithness last week, Glenrothes faced the same opponents at Carleton Park on Saturday. The home fans, and some of their sponsors who had enjoyed a lunch at the club, cannot have been optimistic going into the game but how wrong they were.

The game started off in a predictable manner with Caithness moving smoothly from their own 22m area and some slick handling between forwards and backs saw the visiting scrum half touch down under the posts. His half back partner converted and on the sidelines the spectators thought “Here we go again!”.

Glenrothes struck back quickly and enjoyed a prolonged period of pressure with strong carries by all of the forwards punching holes in the Caithness defence. The backs too played their part and Timmy Kennedy and Ross Davidson combined to take the ball close to the visitors line before Davidson offloaded to the supporting Jack Bousie who dived over near the right corner.

The home team, buoyed by their first score, continued on the front foot and grabbed a second try with a delightful crossfield kick from Kain Duguid being caught in full flight by Kyle MacIntosh who then dived over ion the corner to give the Glens a 10-7 lead.

Caithness are near the top of the league and showed their spirit by taking the game back to the Glens. Helped by a couple of penalties they made their way into the home 22m area, moved the ball left then back into midfield where the inside centre waltzed through a hole in the defence to score a try near the posts. Surprisingly, the conversion flew wide.

Glenrothes tried to reply but lost the ball in contact allowing the visitors to clear to halfway where Kennedy knocked on and, in his frustration, fly hacked the ball which struck the referee. Some of the officials Glenrothes have encountered this season may have taken umbrage at this but fortunately Saturday’s referee, Euan Clipson, was in a more benevolent mood and was happy to accept the full back’s apology. Ross Davidson, who had been nursing an injury left the park being replaced by Shaun Gray. Despite the Caithness scrum being under pressure, they won their own ball only to see it being kicked directly into touch. Gavin Turnbull won the ball cleanly at the front of the line and passed to Scott Cairns who in turn gave stand off Duguid the ball. He evaded a number of would be tackles until being halted in the shadow of the posts where he offloaded to Gray who scored a try with his first touch of the game. Gray’s conversion made the score 17-12 and it stayed like that until the interval.

The second half opened with Gray extending the Reds lead. He chipped the ball over the advancing defence, ran on to catch his own kick and outpaced the defenders to grab the try that put Glenrothes ten points in the lead and guaranteed a try scoring bonus point.

Caithness mounted another attack but were prevented from scoring before Glenrothes marched back down field. Gray tried to repeat his chip and catch but this time the ball bounced off a Caithness head and into touch. However the Gray show was not over. Duguid, with the ball in midfield kicked toward the left corner. Caithness hesitated and Gray snatched the ball, skipped past three would be tacklers and scored his hat trick try midway between the left hand corner flag and the posts. Duguid converted.

The home team soon found themselves having to defend as Caithness tried to batter their way over the line. Unfortunately for them they lost the ball in contact. Scott Morrison pounced on the loose ball and passed to Kennedy. He and Gray exchanged passes until Kennedy found himself with only a

wing forward to beat. He rounded this player and sprinted for the line to take a well deserved try, though a tackle on the line prevented him from going close to the posts and the conversion missed.

Again Caithness attacked the Glens line and this time with more success. Calum Calderwood attempted an interception, and may have been lucky not to see a yellow card for what Mr Clipson saw as a deliberate knock on. From short range the visitors forced their way over the line with the conversion narrowing the lead to 15 points.

Another Duguid kick toward the left corner almost led to Gray scoring a try very similar to his third but he was just unable to keep the ball in play. Nevertheless the Reds soon recovered the ball and after two or three thrusts were rebuffed, the ball was moved to the right and Davidson, who had rejoined the fray, dived over in the corner for the Glens seventh try and a final score of 39-19.

This was by far the Glens best performance of the season with every player contributing fully. The set scrum has been one of the successful areas this season and Saturday was no exception. The line out functioned much better than in previous weeks, including one superb steal by Turnbull 5m from the Glenrothes goal line. In the loose the backs and forwards tackled well and while support at the breakdown has sometimes been an issue this season there could be no complaints on that score this week. In the backs the handling was accurate, there were some excellent kicks and overall the decision making was very good. With all the team playing well, picking a man if the match was so difficult that the award was given, rather tongue in cheek, to Ross Davidson for being injured which allowed returning club captain Shaun Gray onto the pitch to claim his three tries. Special mention must also be made of Steven Bell who announced his retirement from playing after the game. He has been a great servant for the club on and off the pitch and on the evidence of Saturday could continue playing for years to come.

Next week, in the final game of the season, the Glens travel to face Orkney for their much delayed fixture and, after Saturday, will head to Kirkwall for the weekend confident that they can compete against the league leaders.