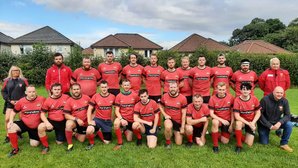 First action in 18 months at Livingston’s annual pre season 15 a side tournament.

Glenrothes Rugby Club returned to action on Saturday for the first time in 18 months with a trip to Livingston’s annual 15 a side tournament. This is not a competition that the Glens tend to do well in and, due to other commitments, the 19 man squad that travelled to Almond Park was missing a few players who are likely to feature in the 1st XV this season.

In the opening game, against Potobello, the Reds suffered a blow when Scott Morrison hobbled off the pitch after the first scrum and took no further part in the afternoon’s proceedings. This also resulted in all the other ties being played with uncontested scrums. The Glens drew this game as both teams scored one unconverted try, newcomer Isaac Robertson notching a try on his debut. Unfortunately this proved to be the best result of the afternoon as the remaining four games were all lost narrowly.

Despite the results there was room for some optimism in the Glens’ performance. Robertson was joined on the scoresheet by Rhys Bryce, Kain Duguid, Chris MacNab and Shaun Gray who all scored tries with Gray also slotting one conversion. Gray had the opportunity to feel his way into the stand-off position, having moved from fullback and Duguid also got to practice his new role in the back row before reverting to the back line later in the tournament.

The forwards carried well in loose play and looked pretty secure at lineout time, though Terry Turpie could do with more options in this phase of the game. MacNab’s try came from a textbook maul following a lineout. With ball in hand the backs asked questions of all of their opponents but the odd wayward pass or dropped ball frustrated their efforts. In defence, first tackles were generally good but, if the opposition recycled a number of times, cracks started to appear and most scores conceded were scored out wide after a period of opposition possession.

Coach Ron Harris will be pleased with some aspects of Saturday’s play but will also be aware that there is still plenty of work to do with his players if they are to make an impression when the league season starts in September. Prior to that, the team travel over the Tay to Dundee on Saturday to face Harris.