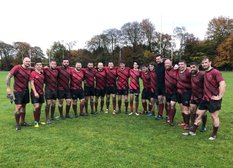 On Saturday, Glenrothes entertained Rosyth Sharks in their latest friendly game. Despite the rain and a very soggy pitch, the crowd were rewarded with a twelve try effort from the home team, with three players claiming hat tricks.

The first try of the game came from a Sharks scrum which Glenrothes won. The ball was moved quickly across the park to Banu Mihai in the centre and he slalommed his way through the defence from the visitors 10m line touching down between the posts. Kyle McIntosh converted.

McIntosh scored the second try, latching on to a clever cross field kick from Kain Duguid to touch down in the left corner. Derek Mitchell took over kicking duties but was unsuccessful.

From the restart, Lee Gartshore made ground before offloading to Chris McNab who burst through a number of tackles before setting Terry Turpie free to gallop up the park. He handed the ball on to Matthew Clowes. The prop was halted on the goal line and popped the ball to Ross Anderson for his first, and easiest, try of the day. Anderson followed this up with another try benefiting from Turpie and Mitchell breaking up the blind side after another dominant scrum from the pack.

For the fifth try, McIntosh broke through from the 22m line to the posts before handing the ball to Banu to touch down. Mitchell converted.

There was still time for two more tries before the interval. Firstly Anderson rounded off his hat trick when he finished off a slick passing movement, popping up on the opposite wing to take the scoring pass. McIntosh completed the first half scoring bursting through three would be tacklers after captain Kain Duguid had opted to take a scrum following the award of a penalty inside the Rosyth 22m area. This made the score at half time 39-0.

It was much the same story in the second half with Anderson opening the scoring with his fourth try when again the forwards won a scrum against the head on the left of the pitch before the ball zipped along the back line to Anderson to put in a strong run from his own 10m line to score in the corner.

Two more hat tricks were completed next as McIntosh and Banu both put in strong runs against ineffective tackling.

Rosyth were forced to move to uncontested scrums during the second period but this meant that the forwards were expending less energy in the set piece and both Nathan Chapple and Kenny Harrow benefitted this by grabbing tries, both converted by Mitchell.
Anderson‘s busy day continued when he was yellow carded for a deliberate knock on as he attempted an interception. The Sharks were unable to take advantage of his absence, ending the game pointless while their hosts had racked up 68 points.

While backs scored ten of the tries, the pack set the foundations of this victory and it was fitting that one of their number, Kaylan Dewar, was declared Man of the Match for his work in the set piece and in loose play.

On Saturday it is back to league business with the firsts journeying to Ellon and the seconds entertaining Waid at Carleton Park. Both games kick off at 2pm.