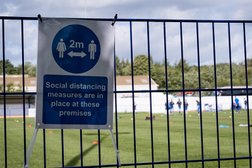 Glossop North End wishes to add to an earlier announcement.

In order to add context to the earlier announcement concerning our scheduled fixture with Spalding UTD, GNE wishes to expand on its decision making and provide detail as to the clubs standpoint as far as the league restart is concerned.

Despite this, earlier today, we were sent an update which contradicted the above, clubs were now allowed to play fixtures on Saturday 19th Dec with agreement from both teams, with the league looking to restart fixtures on 26th December without any such consultation that had previously existed. Whilst this posed operational problems in terms of volunteers , stewards and staff to co-ordinate the fixture vs Spalding in a safe way, the problems run deeper than that.

Glossop North End does not support the planned restart of the Northern Premier League season on the 19th or 26th December under current circumstances. Whilst we note that lobbying has enabled 200 home supporters to attend fixtures hosted by clubs in T3, sadly we still don’t see this as being a financially viable plan, even in the short term. Following liaison with Derbyshire County Council and Derbyshire Police, we are being told that whilst in T3, we cannot open our clubhouse / bar environment even as a takeaway. If other pubs and food outlets can do takeaway, we shall challenge the council along with our local MP and encourage them to spell out why we are being treated differently.

With no secondary matchday income apart from limited gate receipts, predictions suggest the club will suffer heavy weekly operating losses even in a best case scenario under these conditions. GNE does not see how it should be expected to finance this loss week in - week out for an indefinite amount of time whilst the threat of further lockdown's after Christmas is still present, and cases continue to rise in Derbyshire & the High Peak.

We have written to the Northern Premier League, asking them to re-consider this decision. Whilst we all want football back as soon as possible for a multitude of reasons, GNE believes this should not compromise the member clubs of the NPL in such a way that threatens their financial stability.