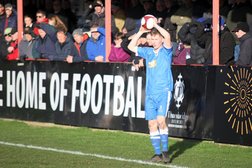 GNE are pleased to announce that Jack O'Leary has agreed an extension to his original short term deal at The Amdec Forklift Stadium, and will now remain with the Hillmen until the end of the current campaign.

The extension comes after an agreement was reached with Stalybridge Celtic to allow the 21 year old left back to remain with GNE until the end of the season.

Jack has played in all but one of GNE's three league fixtures since his arrival last month, completing every minute of GNE's away trips at both Ilkeston & Sheffield. Jack has recently took the place of Frenchman Bakari Coulibaly, who sustained a training injury during mid January. Bakari has now recovered & returned to the UK to resume training with the squad.