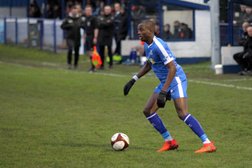 Having flown back to his native France following the suspension and subsequent cancellation of the Northern Premier League season in March, Jeremy has made the decision to remain in his home country after one season in English football.

Jeremy made a total of 23 league appearances for the Hillmen during the 19/20 campaign, his only goal coming in the Tuesday night trip to Cleethorpes Town back in October, where his long range effort saw GNE take the lead on a chilly night on the east coast. Jeremy also appeared for GNE in the Integro League Cup.

Jeremy has taken the opportunity to play in his native France once again, teaming up with Racing Club Lédonien of the Burgundy-Franche-Comté Football League, Regional First Division. More commonly known as RC Lons, Lédonien play their home games in the small town of Lons-le-Saunier, located to the north of Lyon.

Glossop North End joint managers Pete Band & Lloyd Morrison said '' Jeremy has been a great addition to the squad since his arrival in the UK, he's had a great attitude and has been a good team player who would play in any position for the team when required''.

GNE wish Jeremy all the best at his new club and for the future thereafter.