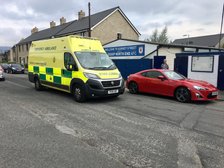 During the early stages of a practice match at The Amdec Forklift Stadium between two GNE squads on Saturday 15th August , defender Lloyd Bannister fell awkwardly after a fair challenge with Ryan Rogers.

After a quick on site assessment by club physiotherapist, George Bryson, an ambulance was called to the scene and the game halted whilst Lloyd received on site treatment.

Lloyd was taken to Tameside General Hospital for further tests and treatments, with examinations confirming a rupture of the left side anterior cruciate ligament, with potential further damage to the medial cruciate ligament as well. This comes after Lloyd had previously ruptured his right side ACL in the past couple of years.

Lloyd is now on crutches and can move around with assistance, however he is ruled out of playing football for the foreseeable future, at least 12 months.

Everyone at GNE wishes the best for Lloyd in his recovery, the club will work with the player and his family to ensure the best possible recovery given the circumstances. The club will make no further comment at this time.