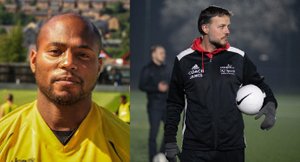 GNE would like to welcome Melford Knight & James Stokes to the club, as part of the ongoing enhancement of the backroom staff here at The Hillmen. Both men will be involved in coaching rolls.

James Stokes (40) said, ''My coaching career started in 2014 with Govan Athletic in the Manchester Football League. During that time I developed as a coach in grassroots sport and took my FA badges - one of those alongside joint team manager Peter Band! More recently i co founded Edge of Play coaching, it was here where I had the excellent opportunity to go in and work with Ian Evatt at Barrow AFC, along with the Preston North End and Fleetwood Town Academies which has inspired me to further my coaching at a higher level. I'm a passionate, driven person who firmly believes that coaching and inspiring players and people throughout any club is key to building success. I'm delighted to have the opportunity to coach at a great club like Glossop North End''.

As a player, Melford Knight was a box to box midfielder who loved a tackle & had an eye for goal. He captained most teams he played for due to his natural leadership abilities.
Since retiring 3 seasons ago, Melford has applied his knowledge of football into coaching the next generation of talent. He now looks forward to a successful return to non league football after having played for Witton Albion, Nantwich, Woodley , Mossley , Ashton United , New Mills , Glossop , Runcorn Linnets , Trafford , Salford , Ramsbottom and Avro Fc