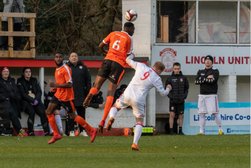 GNE can report that the 23 year old French Centre Half Moussa Samassa has left the club.

Moussa made 25 appearances for the Hillmen during the 19/20 season, his only goal coming from the penalty spot in the 5-1 defeat at Stamford prior to Christmas. Moussa also represented GNE in the FA Cup and FA Trophy, and was dubiously sent off in the Manchester Premier Cup 1st round at Hyde Utd, having received a red card late in proceedings on the night. Moussa made his debut for GNE in December 2018 with an away trip to Runcorn Linnets.

Like his fellow countryman, Jeremy Seosolo, Moussa has decided to stay in France after 2 years in the UK. Samassa teams up with CS Brétigny in Paris.

GNE would like to thank Moussa for his time at the club, and wish him all the best for the future.