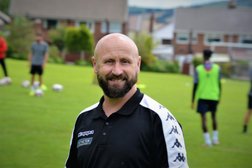 Glossop North End are pleased to announce the appointment of Andy Harris to the position of assistant manager.

Andy, known as 'Haggis' to many, has been part of the backroom staff since arriving at the club in October 2018 as part of Pete Band & Lloyd Morrison's management team after spending multiple years at Abbey Hey. Andy was particularly instrumental last season in developing new strategies and training sessions that took training to a new level.

Upon the resignation of outgoing joint manager, Lloyd Morrison, Pete Band has wasted no time in re adjusting the first team coaching and management setup, appointing Harris to assistant manager.