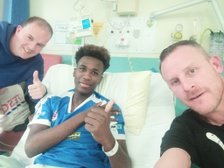 After sustaining a heavy challenge in the 74th minute of yesterday’s Northern Premier League fixture at Loughborough Dynamo, debutant Papis Touray suffered a severe injury that brought his participation in the game to an end.

An ambulance crew was called to the scene following the temporary suspension of the fixture as a result of Papis’ trauma. Papis’ condition was assessed and controlled at the scene by club medical team George Bryson & Gemma Egan, along with volunteers from both clubs. Following Papis’ safe removal from the field of play, the match resumed after a delay of over 40 minutes. Papis was transferred immediately to Leicester Royal Infirmary for further treatment.

Whilst the initial X-rays and ECG Scan luckily show no fractures of the upper or lower leg, Papis has sustained a major dislocation of the right hand knee & joint, with suspected damage to the Anterior Cruciate Ligament, Lateral Collateral Ligament, Medial Collateral Ligament and Prosterior Cruciate Ligament. Whilst no urgent surgery was required on arrival at Leicester Royal Infirmary it remains to be seen weather further work will be required to minimise any additional complications.

Papis is due to be transferred to the North Manchester General Hospital tomorrow for further continuation of his care, allowing more observations and tests to be carried out.

It is safe to say that Papis is in the best possible hands at this moment in the care of the doctors and nurses at this early stage of recovery, going forward the club will work together with the player and his supporting family to help maximise the chances of a successful recovery. Papis is said to be in good spirits and handling the situation with great bravery and strength.

Sadly, the damage will mean a long road to recovery for the young player, but all at Glossop North End wish Papis a speedy recovery.

The club will make no further comment at this time.