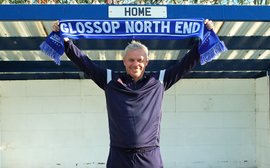 Mellish, 51, is no stranger to enjoying success at this level having guided Warrington Town to the title four years ago after replacing Shaun Reid at Cantilever Park.

The former Yellows boss, who guided the club to eighth in the Premier Division the following season prior to his departure, picked up a first piece of silverware in 14 years when beating Farsley Celtic in the final of the Challenge Cup and went on to reach the second round of the FA Cup, losing out to Gateshead after beating League Two side Exeter City in the previous round.

Chairman Dave Atkinson said, “With almost 20 applicants and with the news from the FA regarding the Step 4 division realignment, we agreed that we would not rush an appointment to ensure we selected the right candidate and that they had time to ensure Glossop’s division position was right for them. We are determined to keep the club moving in the right direction and to keep growing on what Pete Band started and feel that the experience and know-how of Stuart is the best way to ensure that we retain our NPL Pitching in status. Fortunately, there are no games until pre-season, so the new manager will have the chance to assess the current squad and make their plans for the new season.”
Stuart played his professional career as a Central Midfielder, starting off playing for Altrincham in 1985, before joining Blackpool the following year for a season. At Rochdale he played three seasons before joining Witton Albion in 1989 where he won the Northern Premier League title in the 1990/91 season. Moving on to Southport in 1992 and Barrow in 1994, Stuart finished his playing career back at Altrincham for the 96/97 season.
His move into management started in November 2013 when he joined Warrington Town as the assistant manager. Taking over from Shaun Reid as interim manager in 2016, Stuart was made the permanent manager in Feb 2017. With the arrival of the new board in the 2017/18 season, Stuart parted company with the club by mutual consent a few months into the season. In July 2018 Stuart became the manager at Clitheroe in the NPL West Division, but after a tough start against teams that would go on to get promotion that year, Stuart left after around 10 games, the highlight of which was a 5-5 draw against Sunderland Ryhope finishing the game with only 8 players.

Stuart had this to say to the supporters “ I'm delighted to be given the opportunity to manage Glossop North End, and looking forward to producing a team that the fans and the town can be proud of. We are GNE! “

We welcome Stuart to The Amdec Forklift Stadium and look forward to seeing him on the touchline for the first pre-season game.