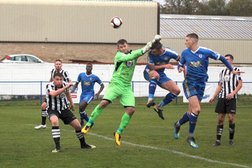 Strong home performance against top of the table

On a very wet afternoon, the Glossop faithful were rewarded with an excellent performance from their team. Carlton Town arrived at the Amdec Forklift Stadium on Saturday as league leaders. Their away record was awesome – five straight away league wins and no goals conceded. A tough afternoon looked on the cards for the Hillmen. After twenty minutes, the fans feared the worst. A defensive error had gifted Carlton the opening goal and the visitors had come close on several occasions.

A fierce shot from Jack Tuohy brought a wonderful save from the Carlton keeper and slowly North End worked their way into the game. At half time, the away side were still in front but the feeling was that Glossop deserved to be level. The second half belonged almost entirely to the home team. North End were straight out of the blocks and looked certain to score when Tuohy met a right-wing cross with a fierce drive but Steggles beat out the shot and Ahmadi’s attempted finish cleared the bar. Ahmadi came close again from Tuohy’s clever pass. Finally, on sixty minutes, the equaliser came as Lee Wilcox produced a great turn and cross from the right for Ahmadi to smash the ball past Steggles. Carlton had conceded for the first time away from home in over 500 minutes!

Both teams deserve credit for the commitment and quality shown in less than ideal conditions, but it was Glossop who came closest to stealing the three points. Steggles denied Ahmadi as he ran onto a through pass and Tuohy’s follow up was deflected over. Carlton had barely threatened but in added time Glossop had to clear the ball off the line to prevent an undeserved winner. At the final whistle, the fans were delighted with the point but also knew that the football played by the home team had deserved all three.