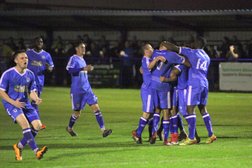 Hillmen through to 1st Qualifying Round

The Hillmen welcomed Eccleshill United to the Amdec Forklift stadium on a drizzly Tuesday evening in the peaks for an FA Cup Replay. In the previous match between the two sides, the goals were shared resulting in a 1-1 draw.

Glossop began the game the better of the two sides, with Jack Tuohy putting a free kick just over the bar. The blues continued to apply the pressure, resulting in Coppin netting after around 15 minutes. However, referee Stephen Rushworth spotted a foul in the build up on the defender and the goal didn’t stand. Glossop came close to scoring again soon after with Coulibaly carrying the ball from left back and putting a shot across goal and just wide of the post.

Both sides we throwing everything at it to try and advance to the next round. The game was hotting up from as it went on with Buchanan receiving a yellow card for a late tackle on Hubert, the GNE faithful seemed to believe the tackle was worthy of a sending off. Midway through the first half it was Eccleshill who were on top and looking more likely to score. They launched a few shots at Dale Latham’s goal which he managed to hold comfortably. He was eventually beaten by Buchanan’s shot which smacked the crossbar and came back out into play, probably the best chance of the half. Neither side were able to break the deadlock in the first half with a high tempo start from both sides but admittedly neither were able to fashion many chances between them.

Eccleshill began the second half much like they ended the first and it only took them five minutes to take the lead. The goal came from a set piece cross from the wing which resulted in Irving making a run towards the near post and catching out Latham to head home and give Eccleshill the lead. 40 minutes remained in the game and Glossop had it all to do...

The Hillmen showed confidence in the face of immense pressure and equalised only only 15 minutes later, and they did it in style. Joel Mills gathered a lobbed ball on the left hand side, cut in and released a curled right footed effort from outside the box which went across goal and nestled in the top corner. An absolute thunderbolt brought Glossop an equaliser and supreme confidence to go on and win the game. Mills continues to impress for GNE and is quickly becoming a valuable asset to the squad.

Glossop were now going all out for the win, with Touhy firing a shot just wide. Eccleshill we’re defending for their FA Cup lives. However, they just couldn’t defend well enough. With just under 20 minutes remaining, substitute Limpishi dribbled into the box and then unleashed a shot which he failed to connect with properly. This shot turned out to be a great pass across goal and was smashed home by the recipient which was who else but Jack Tuohy. The boys in blue didn’t have long left now to defend this lead and advance to the next round.

Glossop’s defensive tactic seemed to be that they would go hell for leather and try and score again to put the game out of sight, rather than absorb pressure from the opposition. Limpishi was Glossop’s main attacking threat, unleashing three shots in quick succession in the box but failed to find the target with any of them. As the game approached the 90 minute mark, Glossop would seal the victory. The frustrated Limpishi would get his retribution, but not from scoring. He collected the ball on the right hand side and started dribbling towards the penalty area. He took a touch towards the byline, wrong-footed his defender who was left scrambling in the dirt, put a low cross into the area and it was another substitute Fitton who would provide the decisive touch to give Glossop a 3-1 lead and ease them into the next round of the cup.

The crowd at Surrey Street erupted when the final whistle went. This victory was well deserved and celebrated joyfully by fans, staff and players a like. Mills and Tuohy impressed again as they always seem to do but it was Limpishi who was the key player off the bench tonight, providing two assists to help Glossop advance.

Glossop’s next game is in the FA Cup again at the Amdec Forklift stadium where they will play host to Pontefract Colliers this coming Saturday.
Full time : Glossop North End 3-1 Eccleshill United