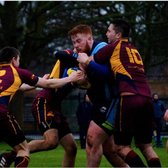 The Warriors have added to their coaching and leadership teams with the appointments of Paul Bolger as assistant coach and Ben Brinkworth as captain.

The Gloucestershire Warriors have added to their coaching and leadership teams with the appointments of Paul Bolger as assistant to head coach Matthew Robinson and Ben Brinkworth as captain.

Bolger has recently moved to Gloucester and is a first year sports therapy student at the university. Robinson believes he can add vital experience to the side, having represented Leinster at senior and under-19 level and Ireland at under-19 level while Brinkworth has played 33 times for the Warriors since making his debut in 2010.

“Paul and Ben have made it an easy decision for me to add them to their respective roles,” said
Warriors’ head coach Matt Robinson.
“Both bring a lot of experience to the forefront and will definitely benefit the Warriors as a whole.”

Bolger is a familiar face to some of the Warriors from last season, having played for Oxford Cavaliers in the Conference League South during 2015.

As well as helping Robinson in an assistant coaching role, he will be donning the black white and red this season and is relishing the challenge.

“It’s a great honour for me to help coach the Warriors this season”, Bolger said.

“This club has great ambition for the season ahead, and I believe with Matty at the helm and great people doing even better work in the background, 2016 is looking like the year of the Warriors.”

In naming Brinkworth as his captain, Robinson has brought a wealth of knowledge to the side. A natural leader on the field with plenty of experience in the West of England league, he played a big part in the Warriors’ title-winning sides in 2011 and 2014..

“I couldn’t believe it when he asked me,” the prop, who is known for his power in the tackle and
strong ball carrying, commented.

“I’ve been really successful with the Warriors in the past, and hope to add to the success this year. I took two years out due to injuries but I’m back fresh and excited for the challenge ahead.

“With a new squad, new coaches, and new league setup, 2016 will be a great year for the Warriors!"

With the season’s start only weeks away, excitement is building and head coach Robinson is feeling confident with the additions to his hierarchy. “Both men have a reputation as strong middle-units and I can’t wait to see what they bring to the table,” he said. “It will be great to see how they develop this season.”

Gloucestershire Warriors are still recruiting for the season ahead. Training is at 7pm on Wednesdays