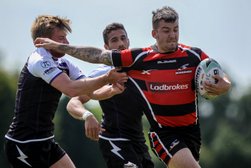 WARRIORS OFF THE MARK IN FREE-SCORING MATCH

The Gloucestershire Warriors earned their first win of the season with a 20-point victory over Swindon St George at a sunny Supermarine RFC.

Attack had the better of defence for the most part with 18 tries being scored but there were periods when each side displayed tenacity in its goalline defence to prevent scores.

The match was almost sealed in the first half as the Warriors dominated the scoring and led 32-12 at the break. The second period was an even affair as Swindon fought back but just couldn’t close the gap enough to threaten a win.

The Warriors led from the first minute as Ryan Tanner went over after Swindon had made a mess of the kick off. Ash Lewis added the first of his seven conversions for the perfect start.

However, Gareth Davies forced his way over for the home side Matt Moulton converting to level the scores three minutes later. Moulton was to miss just one of his seven shots at goal but didn’t get another chance until he added the extras to James Slatter’s try on the stroke of halftime.

Between those scores, the Warriors crossed for five unanswered tries. Dean Cooper bagged the first, breaking through tackles on an arcing run straight from a scrum. Sean Roberts then spotted a gap from 20 metres out and took off on an unstoppable run to the line.

Alex Hoyle then slipped up the touchline to score the third try in six minutes as the visitors threatened to run riot.

However, the Warriors conceded a penalty in possession and Swindon attacked their line but an error let the visitors off the hook and they responded with a try by Matt Jones from a suspiciously forward pass from Connor Jones.

Tanner then made a long break but was hauled down inches from the line by Sam Strong. However, Ollie Cooper scored on the next play with the Swindon defence struggling to get organised. Dean Cooper took over the kicking duties and converted.

After the break, Lewis crossed twice using his pace and strength close to the line but between those touchdowns, Carl Gillespie scored for the home side.

The Warriors then began to leak a stream of penalties and, with the referee allowing Swindon to take quick taps, Ben Bridson helped himself to three tries.

The lead closed to Connor Jones then stepped through Swindon’s goal-line defence to score and after Bridson had finished his personal scoring and the lead had narrowed to 14 points, Dean Cooper finished an excellent set from the Warriors who moved the ball smoothly downfield from a turnover to go past the half century.

Nathan Hayes scored for Swindon, again after consecutive penalties had allowed them to once more batter the Warriors’ line but the Warriors had the final word.

After Hoyle had regained possession from the restart and got to within ten metres of the line, Ollie Cooper stepped inside the cover defence to crash over, finishing an exciting if at times chaotic eighty minutes.