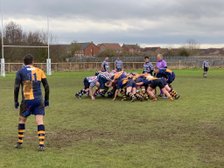 On a wet muddy pitch at Westfield banks Goole's mighty thirds met Pocklington thirds for their long awaited first home fixture of the 19/20 season. Pocklington scored first putting Goole on the back foot. Goole steadied the ship but with strong work in the centres from the visitors they were rewarded by two more tries. The strong wind s was causing both teams problems, but with good kicking from Goole's Chris (Tat)Hancox got Goole out of trouble and put pressure on Pocklingtons back 3. Goole were rewarded just before half team with break on the wing From Freddie Roberts to give Goole a well deserved try. Goole's defence was put to the test again in the second half with the visitors eventually breaking through. Now was time for Goole to put the pressure on with some great breaking runs from Nathan Clarkson and centre Matt Nundy. Harry Patrick keeping control at Fly half and with Hard work from the forwards saw Hancox finally get over the line. The last 20 minutes saw Goole's weary legs concede three tries before the final whistle. Good kicking from the visitors saw the convert 6 of their seven tries. Thanks to Pocklington who in the true nature of the game lent us players when we suffered injuries. Goole are at Home next week to Grimsby 2s. Ko 2.15pm.